Yesterday, I came back from Utah after attending the Sundance Film Festival. It was pretty interesting...besides watching my sister's film The Flip Side, I also watched a New Zealand short film called Moko as well as a Japanese gangster film called Brother (which had Omar Epps and Tatyana Ali in it). Brother was actually pretty funny in a gross / sadistic kind of way...considering just how tongue-in-cheek the filmmakers depicted guys getting shot in the head, their fingers being sliced off and other neat / disturbing stuff.

The one bad thing about Utah is that it's not the place to be when you're sick...especially during the winter. Considering the fact I arrived in Salt Lake City with a headache, walking in 40-degree weather during the day and 20-degree weather at night is not really a prudent thing to do. As of this typing, I'm still coughing, darn it!

Anyways, as for the celebrities that attended Sundance, I saw actor Forest Whitaker...who was at the hotel where my sister's film was being shown. In case you people don't know who Forest Whitaker is, he was in Ghost Dog: The Way of the Samurai and, um, Battlefield Earth. Not exactly the same as running into Sean Connery or Al Pacino...but it'll do.
Posted by Richard at 6:00 PM 0 comments 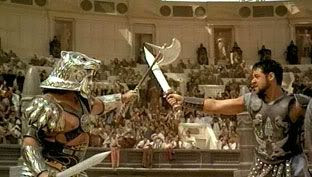 I'm a day late in mentioning this, but congratulations to director Ridley Scott for Gladiator nabbing the Best Motion Picture Drama award (as well as the award for Best Original Music Score) during the 58th Annual Golden Globe awards.

Now let's see how the Roman epic fares in the Academy Awards two months from now...