REST IN PEACE, LESLIE NIELSEN (1926-2010) & IRVIN KERSHNER (1923-2010)... I'll always remember how much The Naked Gun movies cracked me when I watched them when I was young. That scene where Detective Lt. Frank Drebin (humorously played by Nielsen) accidentally knocked a wheelchair-bound O.J. Simpson off a stadium ledge at the end of The Naked Gun: From the Files of Police Squad!? Hi-larious. Though it's been a while since I've seen Airplane!. I should rent it on DVD. 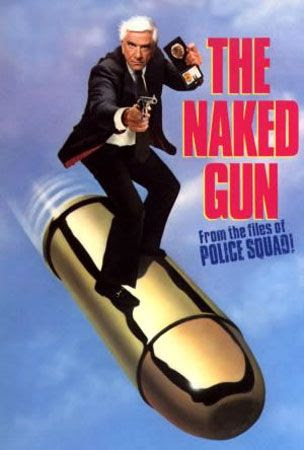 As for Mr. Kershner... The Empire Strikes Back will always be the best film in the Star Wars saga. Always. I also found out that he directed Robocop 2. Even more awesomeness.

These two fellas will be missed. 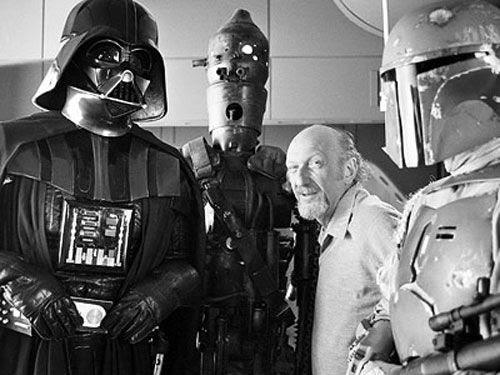 Happy Thanksgiving Day, everyone!!! Just thought I’d share these images and posters from Disney’s Tron: Legacy...which comes out in theaters next month. This movie has absolutely nothing to do with Turkey Day, but it does have something to do with how gorgeous Olivia Wilde is (I don’t know the meaning of the word 'obsession', haha), and how friggin’ awesome the visual FX will be in this sequel to the classic 1982 film...which, as an FYI, was one of the first flicks to utilize computer-generated imagery. I'm sure you wanted to know that. 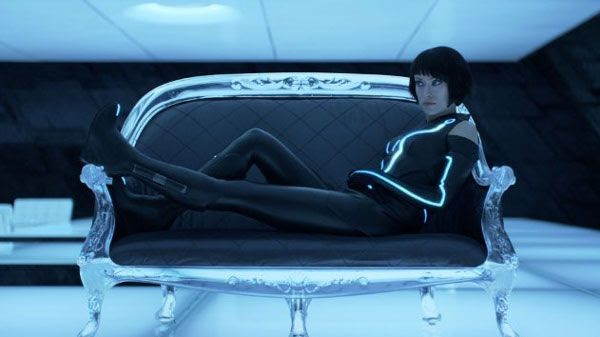 So anyways; enjoy your turkey, ham, mashed potatoes and shrimp cocktail...and don’t forget that 2007’s The Simpsons Movie will be broadcast on television for the first time later night (on FOX). Oh, and as for today's football schedule: The New England Patriots will play against the Detroit Lions, the New Orleans Saints will compete against the Dallas Cowboys, and the Cincinnati Bengals will take on the New York Jets. That is all. 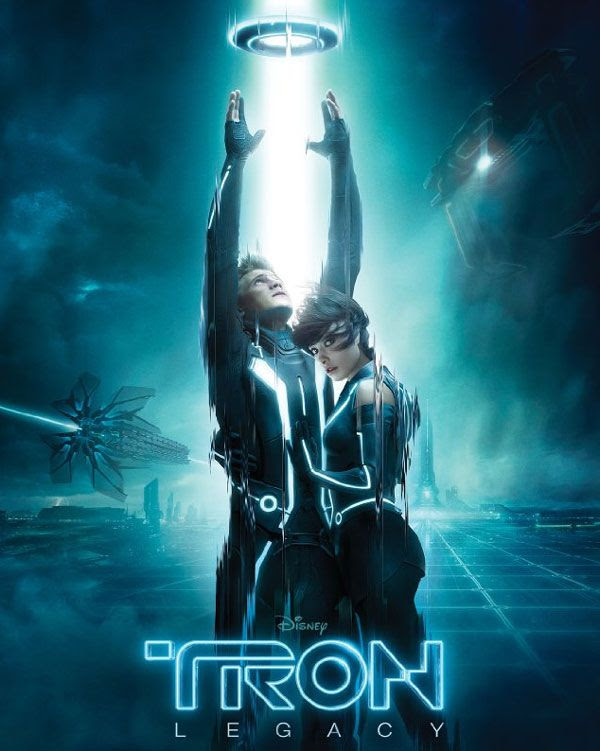 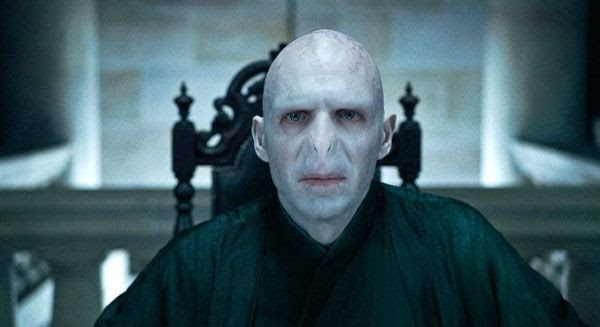 HARRY POTTER AND THE DEATHLY HALLOWS, Part 1... In case you’re wondering why I made fun of the movie’s title like this, click on this link to a journal entry that I posted about the first Harry Potter film back in 2001. Anyways, I saw Deathly Hallows yesterday...and thought it was good for the most part. The tone of this film is COMPLETELY 180° from that of the first Potter flick, The Sorcerer's Stone, in '01. Lots of blood (and exposed muscle tissue on one of Ron Weasley's arms in one scene... Nasty) are in this movie, and don’t forget that sexual image of Harry and Hermione Granger—both essentially nude as they make out in front of Ron during the moment he destroys that locket with the Sword of Gryffindor (yes, I went on Google to make sure I spelled that name right). 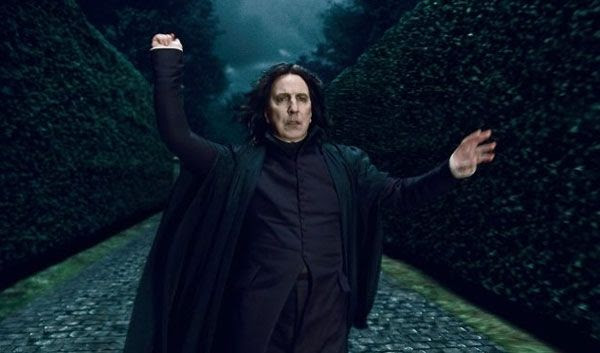 Deathly Hallows had several Lord of the Rings-type moments, which in one way was a good thing (the serious undertone was a welcome change after the kiddy atmosphere in the first 6 movies...though Goblet of Fire and Order of the Phoenix were actually pretty boring because of the dark tone that started to emerge as those films went on) and in another way wasn't. There were shots after shots of Potter and his two threesome partners (err, Hermione and Ron) walking aimlessly about across a grassy/forest landscape before brooding inside that large magical tent that Hermione somehow kept inside her purse. I was waiting for Frodo and the rest of the Fellowship of the Ring to make a cameo, haha. These drawn out sulking scenes were obviously the result of dividing this story into two separate movies. David Yates (who directed this film as well as The Half-Blood Prince and Order of the Phoenix) had to find SOME way to get this Potter flick to the usual 2-½ hour running time... 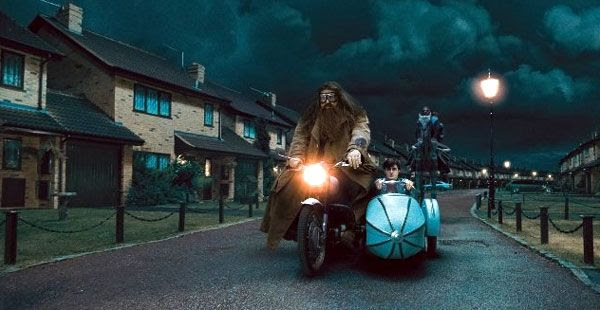 One thing I really liked about Deathly Hallows, however, were the large number of action scenes in this flick compared to the previous movies. The best scenes in Deathly Hallows were obviously those of Lord Voldemort and/or his minions as they hunted down Potter and company. And nice allegory to the Nazi discrimination of Jews with the whole Muggle persecution by the Ministry of Magic thing. I guess this was J.K. Rowling’s attempt at bringing substance and relevance to this first installment in the final Hairy Pothead film chapter. That is all.

BATTLE: LOS ANGELES... I obviously don’t know how good the alien invasion movie (which comes out in theaters next March) is gonna be, but HOLY S**T, the trailer for it looks totally bad-ass. You can tell by the screenshots I posted below... 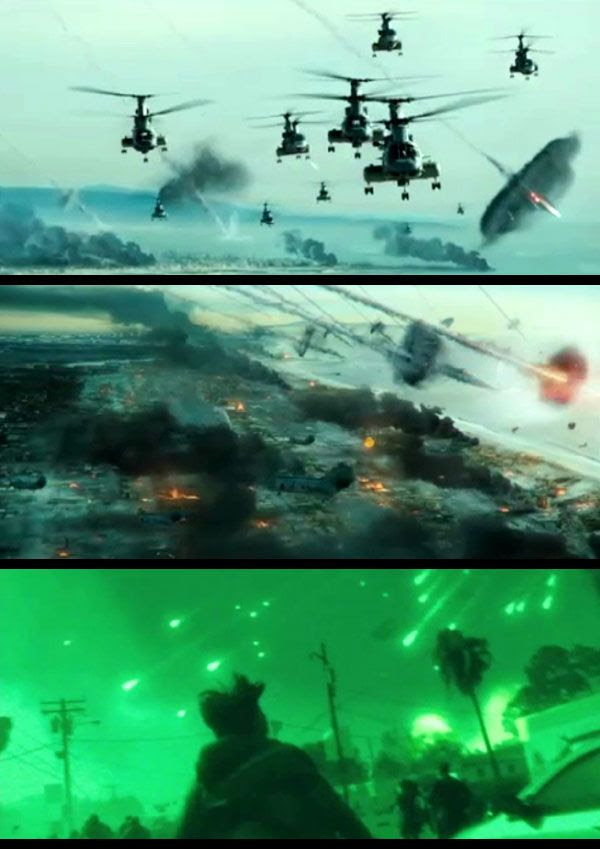 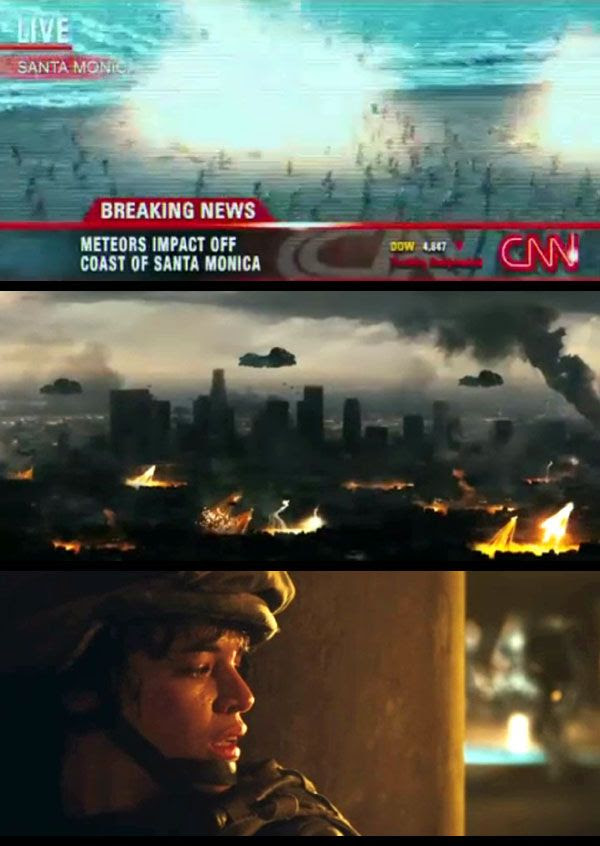 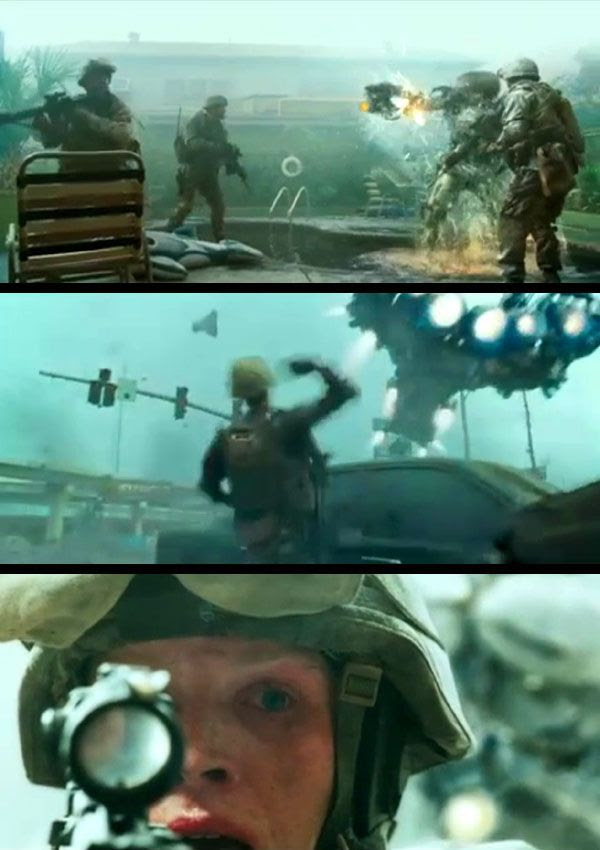 And of course, here is the Battle: Los Angeles trailer itself: 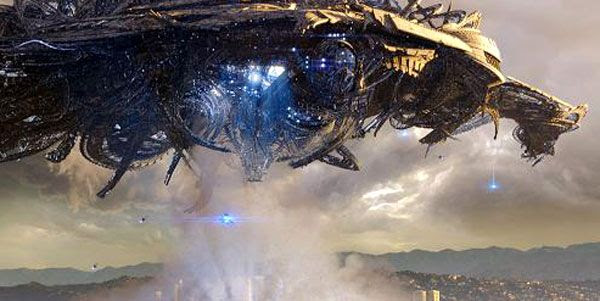 SKYLINE... I saw the low budget sci-fi film last Saturday, and here are a couple of notes on it:

-- The computer-generated imagery in Skyline was simply awesome. Of course, this is due to the fact the filmmakers (Colin Strause and Greg Strause...the brothers who brought you Aliens vs. Predator: Requiem) employed a bunch of no-name actors that you would see on a CW Network TV show like um, Gossip Girl to save money that was obviously devoted to the visual FX. (This no-name cast excludes David Zayas—who was last seen as a dictator being manipulated by Eric Roberts in last August’s action film The Expendables.)

-- The first 10-15 minutes of Skyline had the most pathetic attempts at character development I’ve ever seen on the big screen. Out of all the so-called characterization (some dude travels from out of state to Los Angeles to hang with rapper friend; rapper friend cheats on his girlfriend with another hoochie mama; and the girlfriend of the dude who came from out of state to hang with rapper friend is pregnant), there was only one storyline that managed to be focused on at the end of the film: One of the girls being um, 'preggers'. Of course, the fact that all but two of the characters mentioned above get killed over the course of the movie is a good reason for this. But still...Skyline's character development was atrocious.

-- It’s a wise move that the military would use Unmanned Aerial Vehicles (UAVs) in the initial attack on the alien ships. Nice use of Northrop Grumman’s X-47B...a prototype UAV that, in real life, may possibly conduct its first flight next month.

-- I like how the aliens are more gruesome than Predator in that they not only rip people's heads off, but they also ingest the humans' brains and gain whatever memory is inside it.

-- Skyline is worthy of being considered an Oscar contender for Best Visual FX (that is...before the nominees are narrowed down to 3 choices). Best Art Direction? Probably not. This is because the aliens were a cross between Predator, the Cloverfield monster, the aliens from Señor Spielbergo's War of the Worlds and the Arachnids from Starship Troopers. Also, the mothership (that gets shot down by an X-47B armed with a nuclear missile) resembled the Romulan vessel Narada from the 2009 Star Trek film...while the smaller aerial craft/creatures were a rip-off of the Sentinels from The Matrix.

-- Skyline cost $10 million to make and made $13.2 million at the box office as of this journal entry. Nice to know that it won’t be considered a flop. 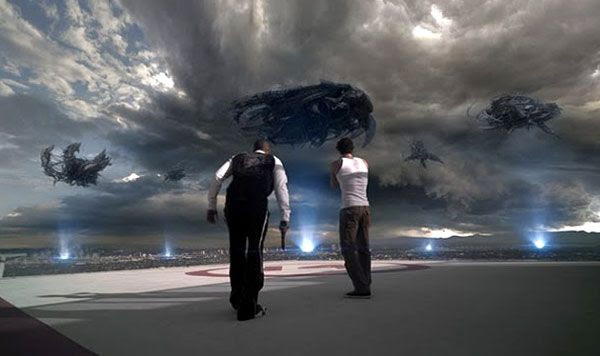 AND...THAT'S A WRAP! On Tuesday, principal photography (a.k.a. filming) was officially completed on Transformers: Dark of the Moon. The news came from TF3 actor Tyrese Gibson via his Twitter page. Awesome news. Assuming, of course, the final product will be as fun as the original 2007 film and not have as many plot issues as Revenge of the Fallen did. Anyways, now comes the postproduction work on Dark of the Moon...where Industrial Light & Magic and Digital Domain will spend the next 6-7 months bringing Giant Alien Robots back to life—including the new Decepticon baddie, Shockwave. We should be getting some nice official photos from the TF3 film shoot by the end of this year, while we’ll presumbably see actual footage from the film via a Super Bowl TV spot by...early February. Can’t wait.

Courtesy of Splash and Just Jared
Posted by Richard at 8:53 PM 0 comments 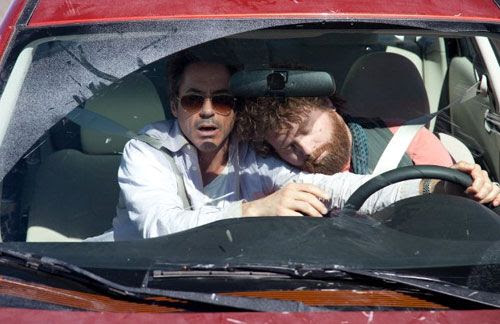 DUE DATE... I saw the film last weekend, and while it had a couple of funny moments like The Hangover did, Due Date wasn’t without its flaws. The first issue I have is with the number of times Robert Downey Jr. (as Peter Highman) gets into an accident thanks to Zach Galifianakis (as Ethan Tremblay)—obviously intentional—and pretty much comes out of ‘em as if they were mere paper cuts. In one example (shown above), Ethan falls asleep behind the steering wheel and causes the car he’s driving to veer off an overpass and crash onto the highway below. While he did come away with a broken arm and ribs, Peter still seems 'OK' enough to withstand a future mishap at the hands of Tremblay (in the form of...a gunshot wound)—who didn’t have a scratch or bruise on his face even though he didn’t "tense" up enough to get injured like Peter did during the accident. In another scene, Peter is getting bounced around like a ping-pong ball inside a truck trailer as Ethan—behind the wheel of a Mexican police cruiser towing the trailer—tries to evade pursuing cop cars while the duo tries to head back to the U.S. border (after accidentally driving to Mexico). The trailer flips over during a collision at one point in the chase, and Highman is still well enough to thank Tremblay for getting his arse back into the U.S. moments later. More on this scene below...

In terms of plot issues in Due Date, much of ‘em revolved around the car chase in Mexico. For starters, how did Highman and Tremblay manage to re-enter the U.S. without any additional obstacles...considering the fact that not only did they not have passports on ‘em, but they were driving around in a stolen Mexican police truck with its right passenger door missing? How did they manage to reach Los Angeles and NOT get pulled over by LAPD and/or California Highway Patrol officers who would find it suspicious that a law enforcement vehicle from another country was cruising down a freeway with its sirens blazing, AND missing the door? I obviously understand that the movie is about slapstick comedy and whatnot...but I kinda had trouble suspending my disbelief during these moments. 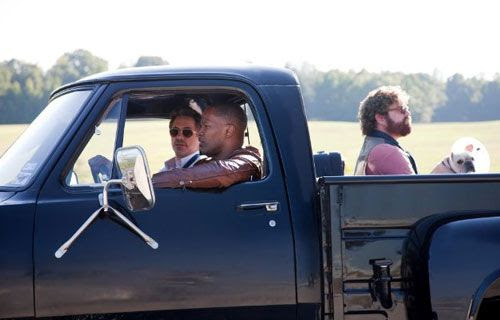 All-in-all, Due Date could’ve been a better film. I like how Highman doesn’t completely lay an ass-whupping on Tremblay after realizing that this entire situation is caused by Ethan’s "vulnerability" due to the death of his father. The scene at the Grand Canyon was a nice moment—though overall, one wonders if Tremblay truly had what it took to act on a formidable TV show like...Two and a Half Men. Probably. I wouldn’t say that Jon Cryer is an Oscar-caliber actor either. 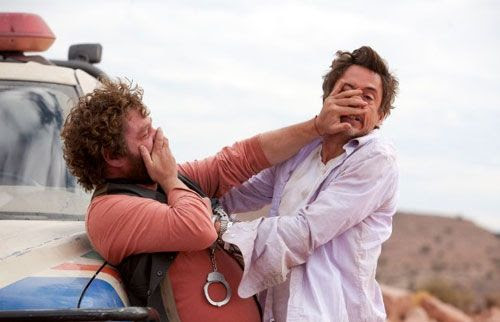