Duel of the Fates: It's Kylo Ren vs. Finn in THE FORCE AWAKENS... 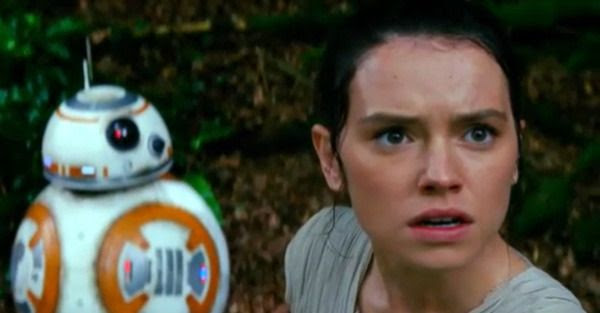 The official Instagram page for Star Wars recently posted this quick teaser showing the First Order rally that was revealed online more than two weeks ago, Rey looking concerned as BB-8 fidgets in the background, as well as Kylo Ren and Finn igniting their lightsabers for a duel that could be as epic as the ones between Obi-Wan and Darth Maul in The Phantom Menace, and Obi-Wan and Anakin in Revenge of the Sith. Hopefully, more footage will be released in the coming weeks (excluding the next theatrical trailer that will be released this fall); especially next week...when The Force Awakens merchandise hits retail stores everywhere on September 4, a.k.a. "Force Friday." I wonder how much a Kylo Ren action figure will cost? Just wonderin'. 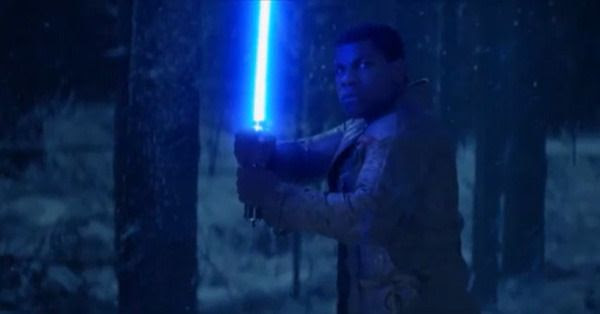 There has been an awakening... #StarWars #TheForceAwakens

Email ThisBlogThis!Share to TwitterShare to FacebookShare to Pinterest
Labels: Revenge of the Sith, The Force Awakens, The Phantom Menace

Photo of the Day: Beware of Kylo Ren! 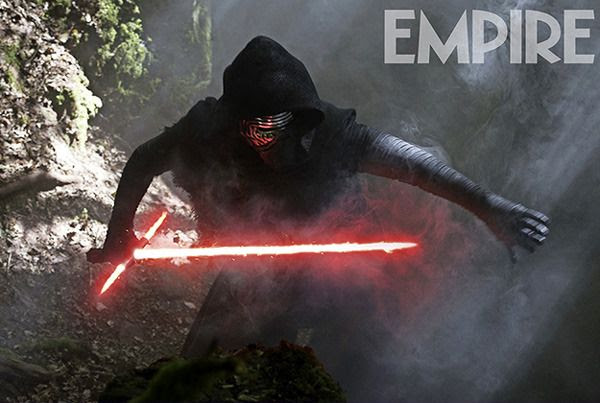 In preparation for its latest issue hitting magazine stands this Thursday, Empire released this awesome new image of Kylo Ren (Adam Driver) as he looks ready to unleash the wrath of the Dark Side on a hapless foe in Star Wars: The Force Awakens. However— this article mentions that Kylo Ren is, in fact, not a Sith Lord...but working under someone who is (That would be Supreme Leader Snoke...voiced and motion-captured by Andy Serkis). To quote Obi-Wan when he said that he didn't remember owning any droids in Star Wars: A New Hope: "Very interesting."
Posted by Richard Par at 8:59 AM 0 comments

Email ThisBlogThis!Share to TwitterShare to FacebookShare to Pinterest
Labels: Photos of the Day, Star Wars trilogy, The Force Awakens


Director Roland Emmerich posted the tweet above announcing that principal photography just wrapped on Independence Day: Resurgence! (On a not-so-different topic, Marvel's upcoming Captain America: Civil War also completed filming this past week.) Though what I'm wondering is...was the production in New Mexico this entire time? I reckon no. However, I guess that considering the fact that half of Earth's major cities were obliterated in the first Independence Day, there's really no need for location shoots on this movie. Either that, or most of the action takes place on the Moon (see pic below). That'll be interesting.

Independence Day: Resurgence gets released in theaters nationwide on June 24, 2016. 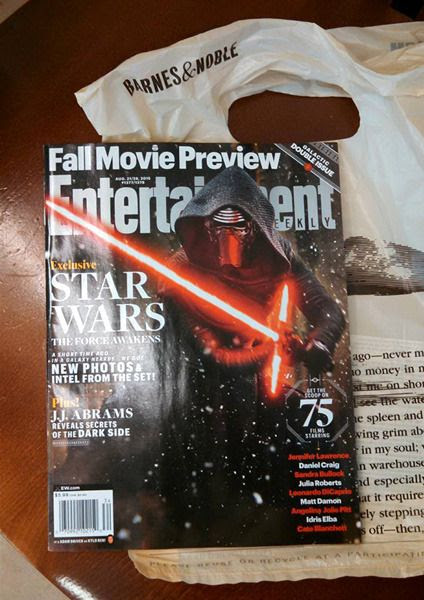 Since last week, I've been traveling to various Barnes & Noble bookstores around my area to see if the new Entertainment Weekly issue with Kylo Ren on the cover finally made its way onto the newsstands. No dice...until today. With this publication now firmly in my possession, it's time to look forward to Empire magazine's own Star Wars: The Force Awakens issue [one of two alternative covers that will grace the October edition is shown below). This issue is set to arrive at bookstores next Thursday (August 27)... I hope to purchase it on the very first trip I make to Barnes & Noble a week from now! 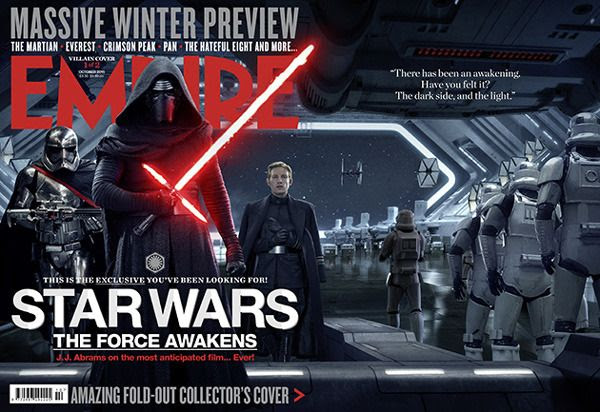 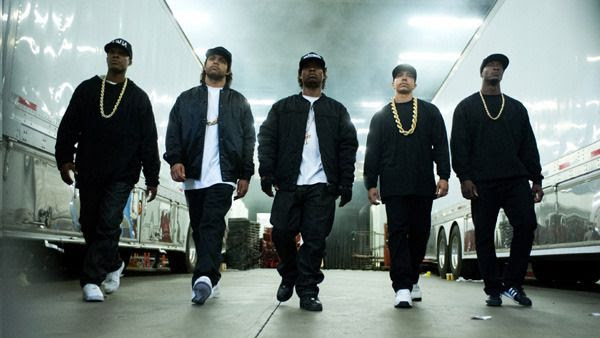 I watched Straight Outta Compton two days ago, and must say that it was a terrific film. I'm a huge fan of O.G. rappers like Dr. Dre, Snoop Dogg, 2Pac, the late Eazy-E, Warren G. and Ice Cube, so of course I enjoyed the origin story of how the rap group N.W.A. was formed (no, it didn't stand for 'No Whites Allowed'...though who would blame Dre and company if that's what the acronym stood for considering what they went through in the late '80s and early '90s? F—k da police). So who else bobbed their head when the song 'California Love' started playing during 2Pac's scene in the movie? I sure did. 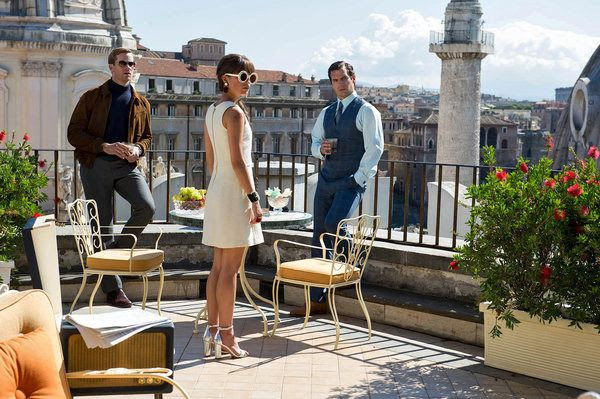 I also watched The Man from U.N.C.L.E. this weekend. Personally speaking, Henry Cavill gave a more interesting performance as art thief-turned-spy Napoleon Solo in this film than he did as Superman in 2013's Man of Steel. But I'm still looking forward to Batman v Superman: Dawn of Justice next year. The lovely Alicia Vikander reminds of the just-as-beautiful Nina Dobrev from Let's Be Cops and The Vampire Diaries (Vikander is from Sweden and Dobrev is from Bulgaria...so I can't really joke about them being related). They should do a movie together. A Star Wars film, perhaps (as villains; maybe so-called Nightsisters)? Hey, I made this same tongue-in-cheek comment when I said that Jurassic World's Colin Trevorrow should direct Star Wars: Episode IX almost two months before Disney actually made this a reality, so you never know! 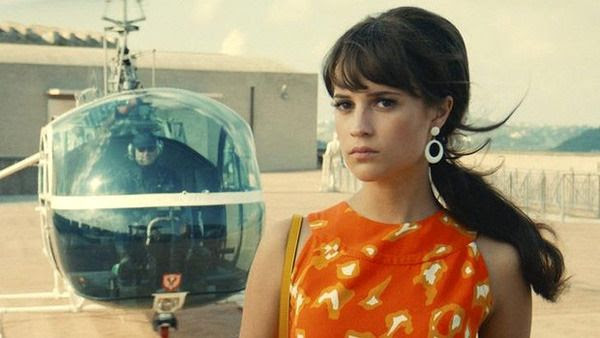 Email ThisBlogThis!Share to TwitterShare to FacebookShare to Pinterest
Labels: Back in the Day, Man of Steel, Movie reviews, The Rise of Skywalker

From ROGUE ONE to EPISODE IX: A Big News Day for STAR WARS Fans!

#JurassicWorld made $500 million domestically in just 17 days.. You know what that means: Colin Trevorrow should direct #StarWarsIX! Or not.


So earlier today, the Walt Disney Company announced that Rogue One has officially begun filming and that Jurassic World's Colin Trevorrow will helm 2019's Star Wars: Episode IX (I called it in a tweet last June! Posted it above). The announcements came during Disney's annual D23 Expo at the Anaheim Convention Center...which is also where J.J. Abrams unveiled the second trailer for The Force Awakens at Star Wars Celebration about four months ago. Also released today was a cast photo for Rogue One, as well as a Drew Struzan-drawn poster for Episode VII that was available only to D23 attendees. Don't know if Struzan drew another illustration that will be featured as the official theatrical poster for The Force Awakens; we'll see. And FYI, September 4 (also known as "Force Friday") is the day when most of Episode VII's merchandise will be released in retail stores. I'm pondering about buying a Kylo Ren action figure to include in my Star Wars collection (I probably shouldn't have told you that— Oh well), but what I'm really looking forward to is John Williams' original music score for The Force Awakens! That probably won't be out for sale till early December though. Or maybe around Thanksgiving... Just my assumption. 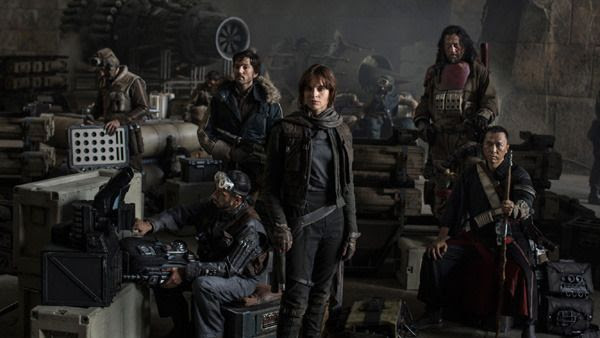 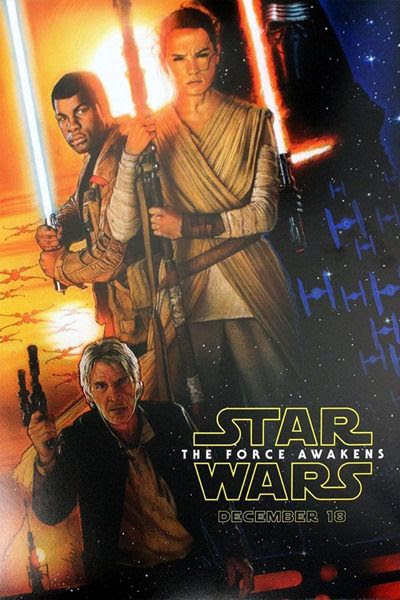 Email ThisBlogThis!Share to TwitterShare to FacebookShare to Pinterest
Labels: Rogue One, The Force Awakens, The Rise of Skywalker

Another STAR WARS Update: Just Shut Up and Take My Money, EW! 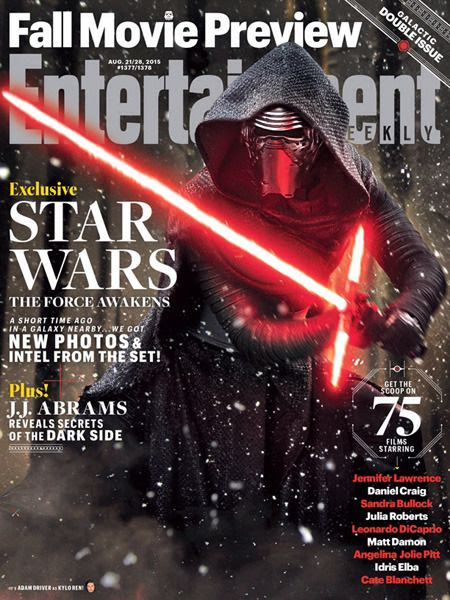 So just thought I'd share these photos from The Force Awakens that will be featured (or are already featured... Have to see if this is already out on newsstands) in the Fall Movie issue of Entertainment Weekly. As if Kylo Ren didn't look badass enough... And considering how close Rey (Daisy Ridley) and Finn (John Boyega) are to the First Order stormtroopers as they are about to open fire on our heroes in the pic directly below, these guys still can't aim. Just like the good ol' days with the Galactic Empire. 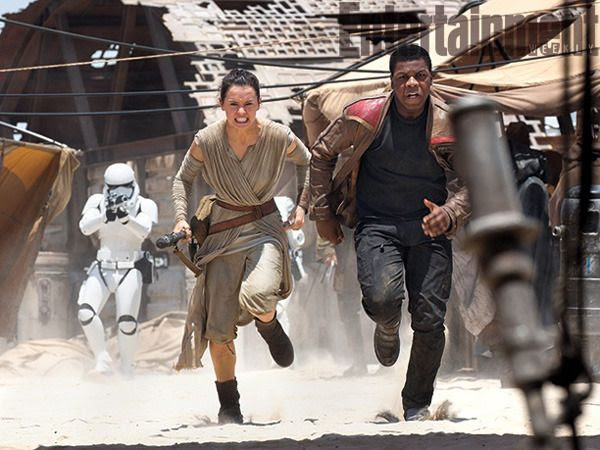 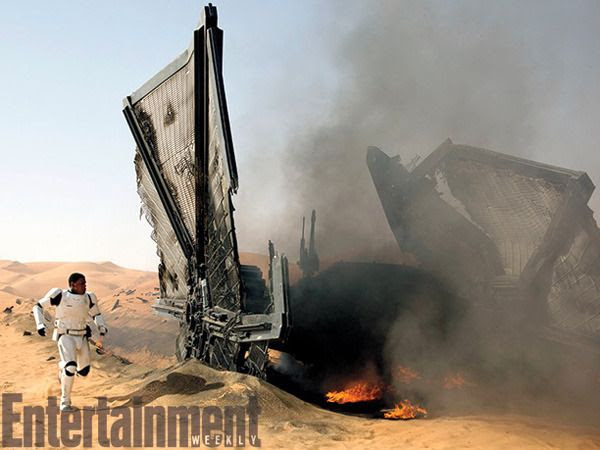 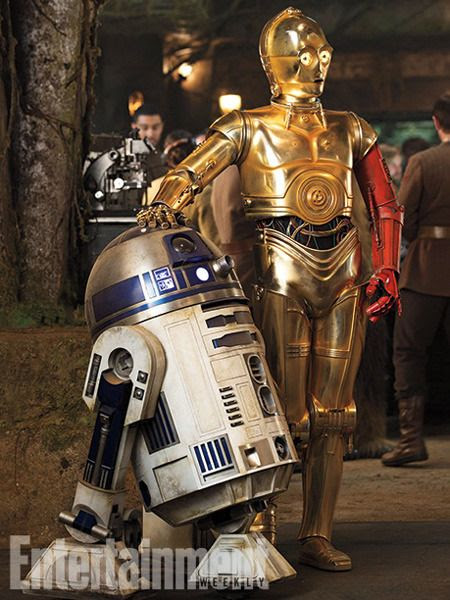 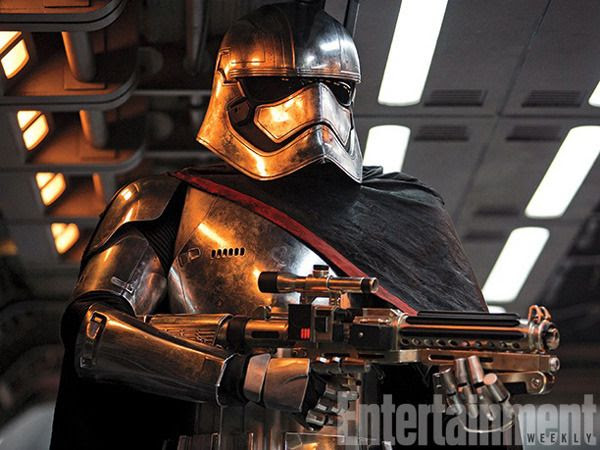 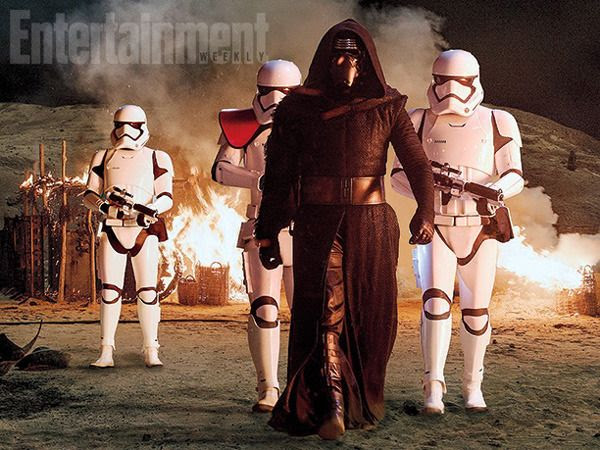 Just thought I'd share these two photos and a video that were recently posted online from the soon-to-be released The Force Awakens and the now-in-production Rogue One. The image above shows a North Korean/Nazi-style rally by the evil First Order—the successor to the Galactic Empire that fell after the Emperor's death in Return of the Jedi—as it plots its next attack on the Resistance and whatever government took control of the Galaxy before the events of Star Wars: Episode VII. This shot came from a new Force Awakens TV spot that aired in South Korea (yes, I know... Random). You can view the trailer below:

The pic below comes from a British website and shows background actors dressed as Imperial stormtroopers as they're waiting to film a scene for Rogue One. Director Gareth Edwards recently started production on the first Star Wars Anthology film...and as this photo shows, we'll get to see Original Trilogy stormtroopers back on the big screen in 2016 while stormtroopers of the new era will invade theaters 128 days from now (if you live here in the U.S.). The excitement is building! 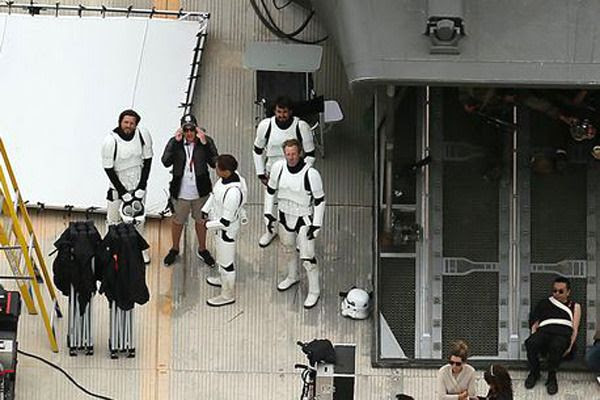 Filming on next year's Independence Day sequel has been proceeding for about two months now, so just thought I'd post this screenshot from one of the most memorable scenes in the 1996 hit film to commemorate the production. I'm sure that director Roland Emmerich has more ways in mind in terms of how the aliens will wreak havoc on Earth in Independence Day: Resurgence (three words: anti-gravity attack!), but I want to see another version of the iconic shot above (well, iconic if you ignore the sadistic, destructive nature of this image) where an alien destroyer uses a single green laser beam to wipe out an entire metropolis in IDR. I definitely can't wait to see the Moon Tug and alien-hybrid jet fighter (shown below) in action! Along with Batman v Superman: Dawn of Justice, Captain America: Civil War and Star Wars Anthology: Rogue One, IDR is making 2016 look like it will give this year a run for its money. But let's see how The Force Awakens turns out first... 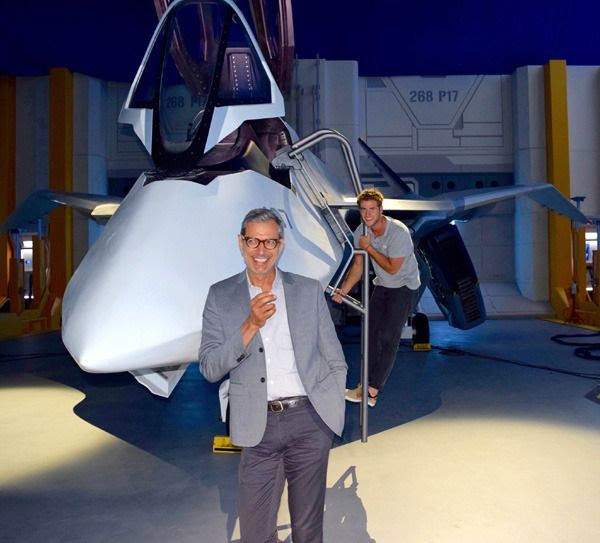 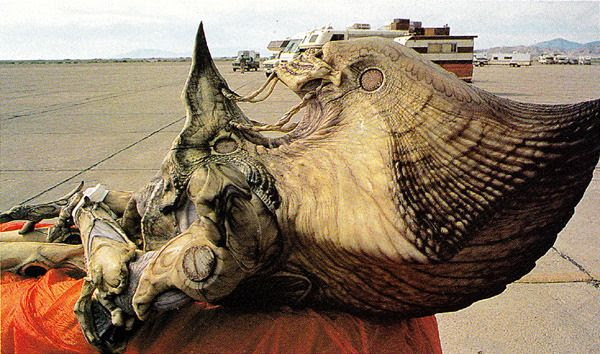 Email ThisBlogThis!Share to TwitterShare to FacebookShare to Pinterest
Labels: Back in the Day, Batman, Independence Day, Rogue One, The Force Awakens

In honor of watching the latest big-screen installment of the popular anime series Dragon Ball Z at AMC Theatres earlier today (the movie was enjoyable if you liked the cheesiness and protracted fight scenes that defined the TV show, which I did), just thought I'd share this collage that I found online showing the many incarnations of Goku throughout the last 30-plus years. From him as a little kid in Bulma and Son Goku back in 1984 to him being a blue-haired 'Super Saiyan God' (Level 2) in Dragon Ball Z: Resurrection 'F', Goku continues to evolve as he becomes ever-so powerful while taking on different adversaries throughout the universe. Whether it's against Vegeta, Frieza, Cell, Majin Buu, Beerus or Frieza again, Goku's transcendence as Japan's own version of Superman grows stronger and stronger whenever he takes on a new foe. But enough about sharing a bio about this badass character... Which version of Goku below do you think looks the coolest? I wonder if FUNimation will ever use my idea of turning Kakarrot (Goku's birth name) into an Ultra Saiyan? You have my permission! Heh. 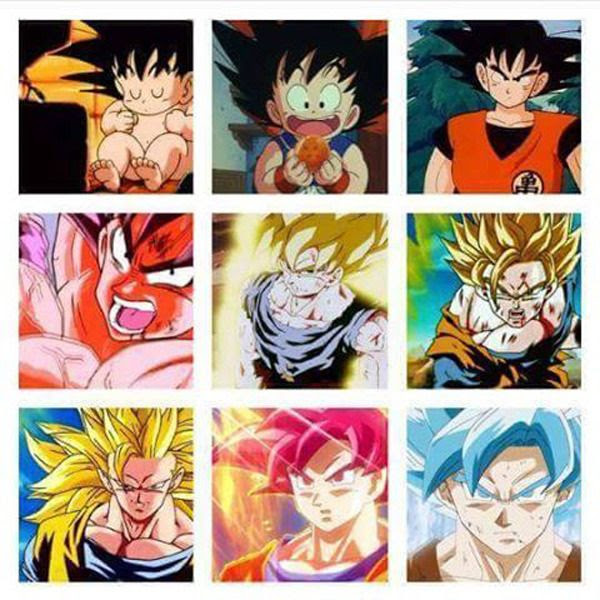 Email ThisBlogThis!Share to TwitterShare to FacebookShare to Pinterest
Labels: Back in the Day
Newer Posts Older Posts Home
Subscribe to: Posts (Atom)