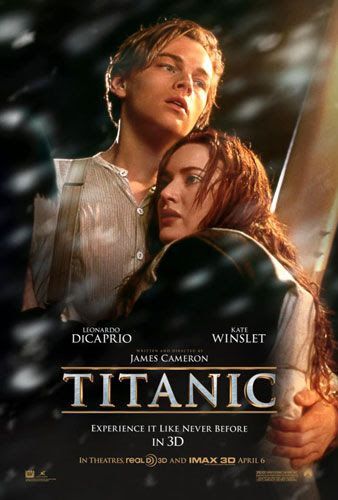 TITANIC (IN 3-D)... For those of you who saw the flick a dozen times after its debut in theaters in late 1997 and were stoked when it beat out L.A. Confidential, Good Will Hunting and As Good as It Gets for Best Picture at the Academy Awards in 1998, you can watch Titanic a dozen more times once it sets sail on the big screen again in April of next year. April 6, 2012, to be exact. (The actual disaster occurred on April 15, 1912.) The only difference this time is, you’ll get to see Propeller Guy (the poor sap who falls off the stern of the Titanic as it rises out of the water, only to slam into a giant propeller blade before he splashes into the icy Atlantic in that memorable shot of the movie) and Kate Winslet’s um, bedroom modeling scene in 3rd dimension. Yes, you can wonder whether or not it’s tasteless that James Cameron is applying the technology he mastered in Avatar to a film about 1,500 folks who perished on the Unsinkable Ship almost a century ago, but oh well. It’s all about the nostalgia factor. Well that— And earning more $$ at the box office.

With The Phantom Menace being re-released (in 3-D as well) in theaters this February and Titanic returning to the multiplex two months later, it’s gonna feel like my high school senior year and first year in college all over again. Sort of. Good times...

Email ThisBlogThis!Share to TwitterShare to FacebookShare to Pinterest
Labels: Avatar, Back in the Day, The Phantom Menace, Titanic, Youtube

More on THE DARK KNIGHT RISES... Empire posted an excerpt from its upcoming magazine article that focuses on the highly-anticipated movie, which gets released in theaters nationwide on July 20 of next year. In the article, director Christopher Nolan mentions that The Dark Knight Rises will take place 8 years after the events of The Dark Knight, and that instead of relying on 'venom' that gave him strength to break Batman’s back in the comic books, Bane will instead use gas emitted from his mask to make him impervious to pain and be virtually invincible. Good stuff. Click on the link above to read more details about the film.

Below is the cover that will only be on issues sent to subscribers of Empire magazine. Everyone else will have to deal with the other kick-ass versions posted in my previous Blog entry. Carry on. 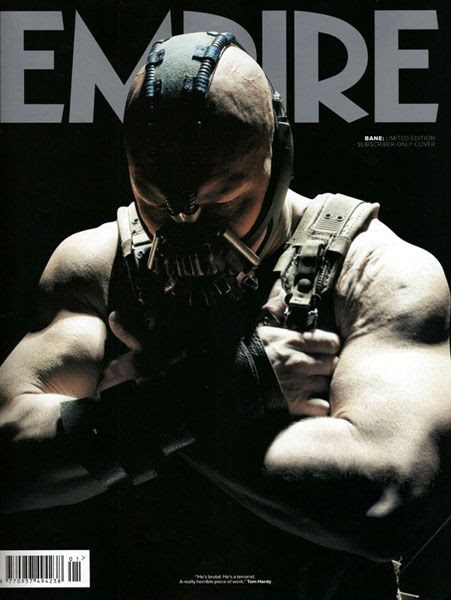 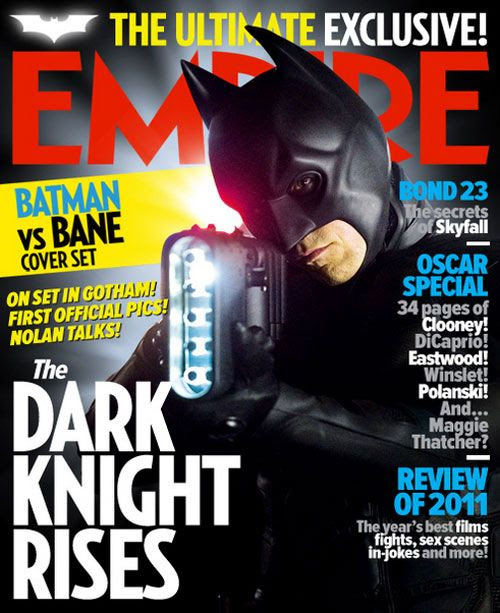 THE DARK KNIGHT RISES... Empire recently unveiled two alternative covers for an upcoming magazine issue that will focus on next July’s mega-blockbuster (yes, it’s safe to assume that The Dark Knight Rises will become a box office hit). Both are awesome...though I’d have to choose the Bane cover to be published first because he has a cool menacing glare in this one. That, and I obviously don’t know what that gadget Batman is holding on his cover. Either it’s a fancy flashlight, a high-tech taser or his own radar gun used to gauge how fast drivers are speeding down the city streets of Gotham. A high-tech taser is the likeliest of the three. 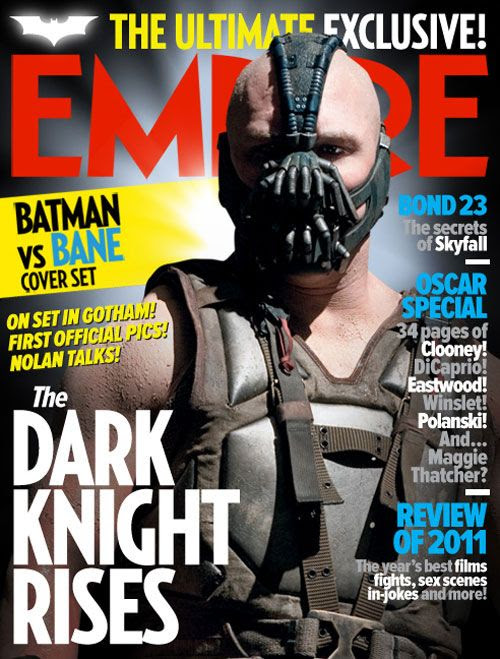 21 JUMP STREET... Check out the trailer for next March’s (comedic) adaptation of the 1980’s TV show—which set Johnny Depp down the path to stardom. Speaking of Depp, he’s apparently going to make an appearance in the movie (despite hearing stories that he actually hated being on the TV show), which stars Jonah Hill, Channing Tatum, Ellie Kemper (of NBC’s The Office), Dave Franco (the brother of Oscar-nominated actor James Franco) and Ice Cube.

It seems like the trailer (unsurprisingly) gave away almost every funny moment in the film, but if you’re still going to check it out, 21 Jump Street gets released in theaters throughout the U.S. on March 16, 2012. 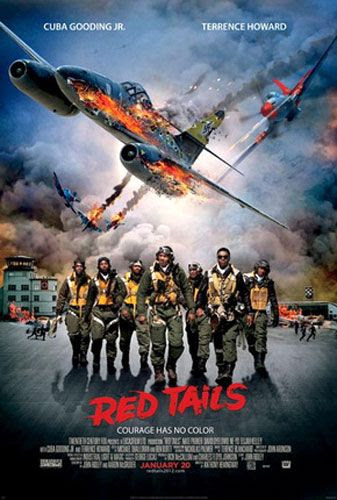 RED TAILS... Check out the trailer for next January’s World War II action flick, which is produced by George Lucas and chronicles the real-life exploits of African-American fighter pilots known as the Tuskegee Airmen. Red Tails, which stars Cuba Gooding Jr., Terrence Howard and...Method Man, is the first Lucasfilm production since 1994 to not be connected with Indiana Jones or the Star Wars saga. Radioland Murders was the last movie Lucas worked on before he focused on the 1997 Star Wars Special Editions and the prequels.

Red Tails gets released in theaters nationwide on January 20, 2012. I’ll watch this flick...though what’s up with the 300-style letter font for the movie’s title? Zack Snyder might not be pleased.

Email ThisBlogThis!Share to TwitterShare to FacebookShare to Pinterest
Labels: 300, Attack of the Clones, Indiana Jones, Revenge of the Sith, Star Wars trilogy, The Phantom Menace, Youtube 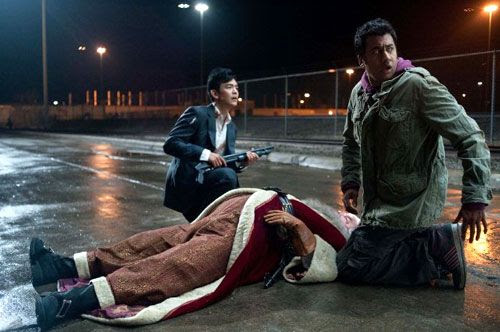 A VERY HAROLD & KUMAR 3D CHRISTMAS... I finally got around to seeing the third installment in the stoner movie franchise yesterday, and story-wise, it was decent. Kal Penn took a break from working for President Obama at the White House to reunite with John Cho and go on another wacky weed-related adventure...this time looking for the perfect Christmas tree instead of the perfect White Castle burger. Neil Patrick Harris once again steals the show when he makes a cameo as a gay-dude-playing-a-straight-guy-who-poses-as-a-gay-dude in Harold & Kumar 3. The lovely Paula Garcés and Danneel Harris—err, Ackles (she’s now married to Jensen Ackles of the hit CW TV show Supernatural in real life) also return, with Garcés' character Maria now married to Harold...and Vanessa, played by Ackles, thinking Kumar is an immature pothead despite him escaping from Guantanamo Bay in the second flick to win back her love (with some help by George Dubya Bush). A Very Harold & Kumar 3D Christmas also stars Patton Oswalt (from the CBS TV show King of Queens), Danny Trejo (a.k.a. Machete), Eddie Kaye Thomas (who worked with John Cho on the America Pie flicks, including next year’s American Reunion) and Elias Koteas (of such movies as Let Me In, Shutter Island and the Oscar-nominated film, The Curious Case of Benjamin Button). 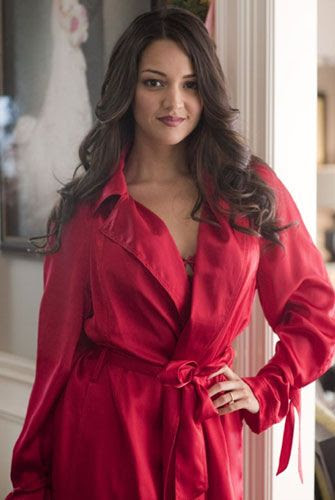 3D-wise, Harold & Kumar 3 looked good in the format. The film was clearly poking fun at this gimmick...but it actually had some cool shots which included an Asian dude (not John Cho) getting bombarded with eggs by a bunch of Wall Street protesters in New York City, broken window shards flying towards the camera after Harold and Kumar throw a burning Christmas tree through it, and numerous scenes where smoke from lit joints and even cocaine powder fly around the room. The movie makes good use of a toy robot ("Wafflebot") that’s able to both make waffles and incapacitate bad guys with hot syrup at the same time. And of course, Santa Claus shows up to help Harold and Kumar get through their wacky ordeal despite Santa getting a shotgun wound to the head earlier, courtesy of Harold. There’s also a funny claymation scene that’s as bloody as anything you would see in an Eli Roth horror flick. Well, sort of. 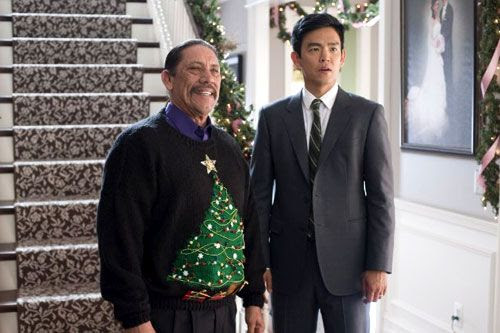 All-in-all, A Very Harold & Kumar 3D Christmas is good fun. It has the usual brand of gratuitous nudity and penis jokes (and some blasphemous takes on Jesus and the Catholic Church...but I’m not a fanatical God-boy so I’ll let them slide), but what else would you expect from the popular stoner comedy? Harold & Kumar 3 (it’s too much of a hassle to always typing the actual title) makes up for this by showing what a dude would do to make his wife happy and earn the respect of her father. I’m talking about Harold and Maria, of course. Kumar is the immature pothead. But yes, he wins back Vanessa at the end as well. That is all.

I wonder if something like Wafflebot is actually sold in stores? Probably not. 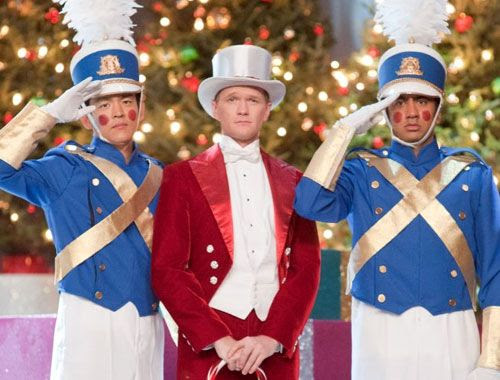 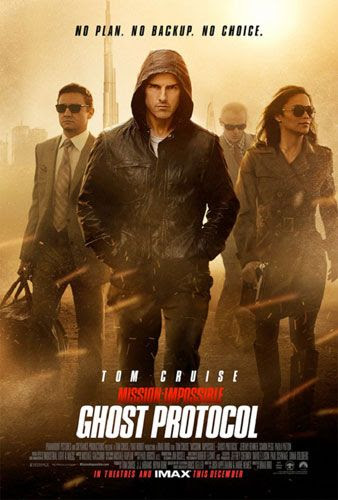 IMAGES OF THE DAY... Check out the newest theatrical poster for Mission: Impossible – Ghost Protocol, which gets released in cinemas nationwide around this Christmas. In case you don’t know yet, a 6-minute prologue for The Dark Knight Rises will be shown in front of Ghost Protocol on IMAX when it opens December 16. To be specific, however, the preview will only be shown on real (RE: 70mm film projection) IMAX screens...not in digital IMAX that you can find at almost any AMC or Regal Cinemas outlet near you. Warner Bros made the same marketing move for The Dark Knight when that movie’s opening bank heist scene was previewed before IMAX screenings of the Will Smith film I Am Legend in 2007. No need to break tradition here. 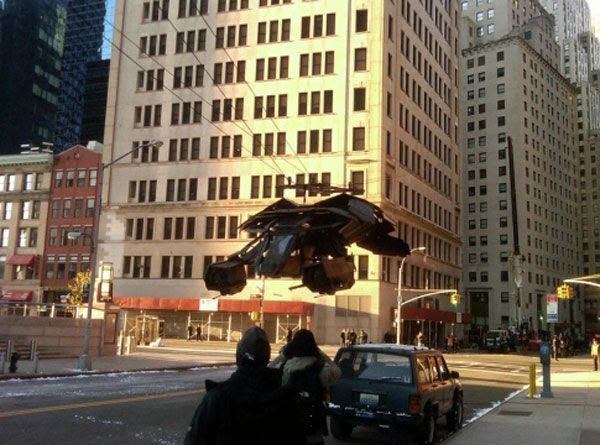 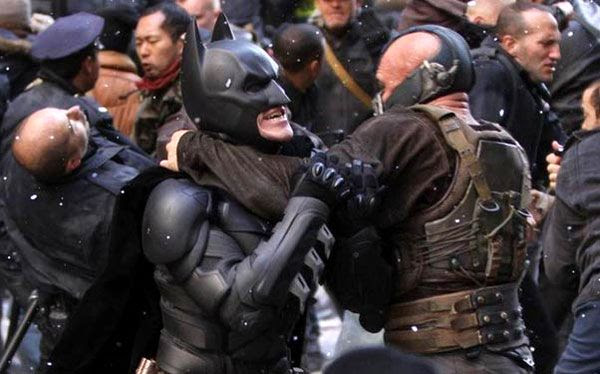 Splash News Online
Posted by Richard Par at 11:55 AM 0 comments

SKYFALL... That’s the name of the upcoming James Bond film (the 23rd installment in the 49-year-old movie franchise), which will be directed by Sam Mendes (American Beauty and Revolutionary Road) and be released in theaters everywhere in late 2012. The photo below shows Daniel Craig with his new Bond girls, Bérénice Marlohe and Naomie Harris. Harris was in such flicks as 28 Days Later, the Pirates of the Caribbean sequels Dead Man’s Chest and At World’s End, and the 2009 action movie Ninja Assassin. Never knew who Bérénice Marlohe was till today, but I’m pretty sure we’ll start seeing and hearing more about her as Skyfall gets closer to cinematic release next fall. Production on the movie began today.

Skyfall is scheduled to come out in theaters nationwide here in the U.S. on November 9, 2012. The cast also includes Judi Dench as she reprises her longstanding role as M, and features Ralph Fiennes and Javier Bardem. Don't know who Fiennes will be portraying in James Bond 23, but it has long been confirmed that Bardem is playing the main Bond villain in Skyfall. Not much of a surprise there. 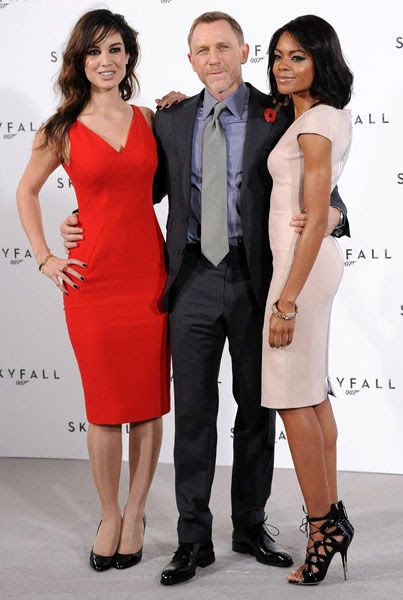