Yesterday, I watched the Russell Crowe-Meg Ryan film Proof of Life with a couple of my friends. The film was pretty good, but I'd say that the movie Russell Crowe is going to be most noticed in for a while is Gladiator.

By the way... For those of you wondering where I got that quote located on the left hand side of this screen (above the archives), it's by Obi-Wan Kenobi in the original Star Wars (1977). It sure beats Jar Jar Bink's "Yousa tinken yousa people ganna die?" remark from The Phantom Menace.

Only 4 days till the official start of the new millennium...
Posted by Richard at 5:54 PM 0 comments

A few minutes ago, I came back from the theater after watching the new Tom Hanks film Cast Away. The movie was pretty good... out of 4 stars I give it 4. 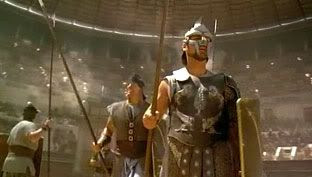 If Gladiator is gonna win a Golden Globe, it'd be for best original score. The film's soundtrack kicks @$$.

The Broadcast Film Critics Assn. also singled out the Roman epic for some awards...while the San Diego Film Critics singled out Russell Crowe for best actor.
Posted by Richard at 5:57 PM 0 comments

Email ThisBlogThis!Share to TwitterShare to FacebookShare to Pinterest
Labels: Gladiator

Well, this news isn't about me...but it's all good. Today, my sister has just informed my family that a film she worked on about 3 years back, called The Flip Side, will be shown at the Sundance Film Festival in Utah. Pretty cool, hah?

For those of you who don't know what The Flip Side is (namely, everyone who reads this), it's an independent film about a Filipino family and how they live everyday life. The person who made this film, one of my sister's friends name Rod Pulido, also attended Long Beach State.

Ironically, it's me who's trying to pursue a career in film. But at least my sis could probably hook me up with connections with some big name filmmakers like George Lucas, HAHA. By the time I talk to Lucas he would've already been done making the Star Wars prequel trilogy. Oh well.

On a different note, I have to get an oil change for my car today.