"You obviously do not know who you are f**king with!" - Blade (Blade II)

It doesn't come out till this December, but I can't wait to see Blade III, otherwise known as Blade: Trinity. The first Blade was cool (especially the opening rave scene sequence)...but Blade II was awesome! Those "Reaper" vampires, like Jared Nomak (below), are pretty freaky! And Leonor Varela, who plays Nyssa (the female vampire who has a thing going for Blade) isn't so bad either. Anyways, I'm not planning to watch Blade: Trinity just because Jessica Biel is in it (although she's a plus, haha...or um, is she?), who plays Whistler's daughter Abigail, but also because I want to see how the story ends...and see Wesley Snipes kick more bloodsucking ass! Yep, can't wait.

STAR WARS: EPISODE III TITLE REVEALED!!!  For those of you who are Star Wars fans, the full title of the third and final prequel is Star Wars: Episode III - Revenge of the Sith.  Not very unique, since the "of the" part was already used in Attack of the Clones for the prequel trilogy and Return of the Jedi in the classic one, but oh well.  This title was a lot more expected for Episode III, so I doubt fans will get into as much a "hissy-fit" for this one as they did back when the title for AOTC was announced in 2001. Revenge of the Sith comes out on May 19, 2005. 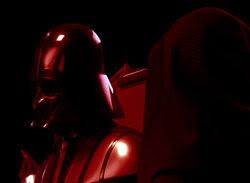 UPDATE: The SITH, for those of you who don't know, which would be most of you (haha), are the main, black outfit-wearing enemies of the Jedi. You know... Darth Vader, Darth Sidious/Emperor Palpatine, Count Dooku/Darth Tyranus and Darth Maul. Oh, and don't forget Darth Bane...but you'd have to be a die-hard Star Wars fan who reads the Expanded Universe novels to know that. Haha.
Posted by Richard Par at 7:54 PM 0 comments

Email ThisBlogThis!Share to TwitterShare to FacebookShare to Pinterest
Labels: Attack of the Clones, Revenge of the Sith, The Phantom Menace
Newer Posts Older Posts Home
Subscribe to: Posts (Atom)