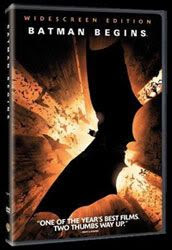 It was either plugging in another shameless advertisement about a film in my journal entry or posting a long-ass blog about how much I hate MySpace and Friendster.com (speaking of which, I think I'll log into them after I finish typing this. NOT! And I'm well aware that I posted a link to my MySpace profile in my Favorites section above), so I chose making the shameless plug instead. Don't forget to pick up the Batman Begins DVD when it gets released in stores next Tuesday. The film made over $205 million in the domestic box office so far, so there has to be a sequel (as long as it's still directed by Chris Nolan, that is). Warner Bros made Scooby Doo 2, for cryin' out loud. Of course— it went straight to DVD.