It would be better if the Dinobots were lurking in the background, but here's a cool pic (if you're a fan of Mark Wahlberg and think that the actress who played Katara in 2010's The Last Airbender has really grown up) of the main stars from next year's Transformers: Age of Extinction. Don't know when we'll see a teaser trailer for the fourth Transformers flick, but if Dark of the Moon is any indication, a December preview would be a safe bet. We'll see. 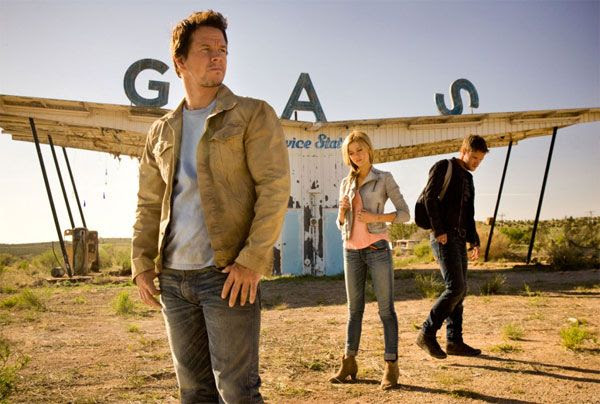 Email ThisBlogThis!Share to TwitterShare to FacebookShare to Pinterest
Labels: Age of Extinction, Dark of the Moon, Transformers

Almost 20 years after the hilarity of the first Dumb & Dumber film, Lloyd Christmas is still sporting a rice bowl haircut. Good— Don't ever change, dude. Welcome back, Lloyd and Harry! 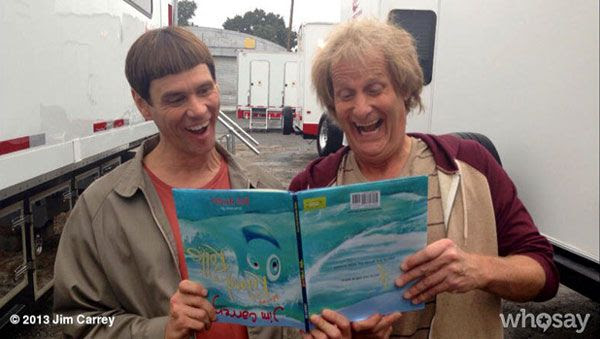 Email ThisBlogThis!Share to TwitterShare to FacebookShare to Pinterest
Labels: Back in the Day, Dumb and Dumber 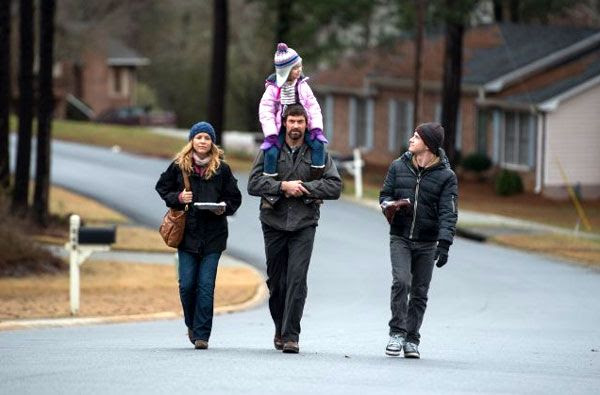 I saw the new suspense thriller featuring Hugh Jackman, Terrence Howard, Viola Davis, Maria Bello, Melissa Leo and Jake Gyllenhaal today, and all I can say is—holy cow, that was one terrific movie. The last time I saw a thriller this moody and intense was when I watched The Place Beyond the Pines earlier this year. In that film, the story was very creative in comparing the so-different-and-yet-so-similar lives of a bank robber played by Ryan Gosling and the cop who pursued him, portrayed by Bradley Cooper. In Prisoners, you have a police detective (played by Gyllenhaal) pretty much going by the book in finding the missing daughters of Jackman and Howard...who, on the other hand, resort to tactics that would make the CIA operatives played by Jessica Chastain and Jason Clarke in Zero Dark Thirty cringe as they tried to make the purported kidnapper (played by Paul Dano) confess to the whereabouts of the abducted girls. 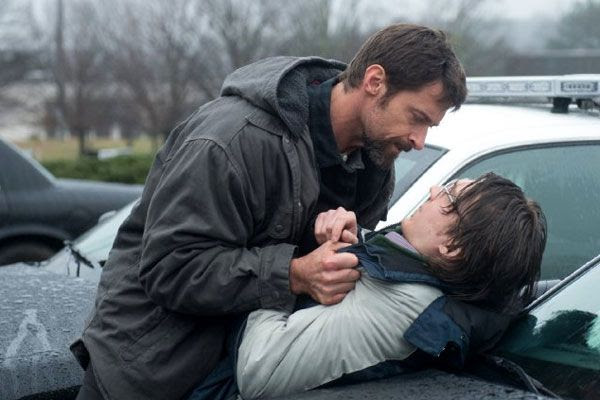 There are lots of twists and turns in Prisoners, with Detective Loki (Gyllenhaal) questioning everyone—including the parents played by Jackman, Bello, Davis and Howard—who may have had any sort of involvement in the girls' kidnapping. Loki even interrogates a pastor, who (surprise, surprise) does have a skeleton in the closet (or in this case, a basement). The thing is, his secret isn't something that you would expect from the priest...only that it still involves the plight of young children gone astray. The mystery behind his daughter's disappearance is so severe that Keller Dover (Jackman) will resort to anything to get answers...from staking out Alex Jones' (Dano) house as he chokes/walks his dog at night to taking the prime suspect to an abandoned apartment building and, while employing all forms of torture on Jones, places him inside a makeshift wooden cell built by none other than Dover himself. The rage expressed by Dover as he questions Jones is so intense that Jackman is more intimidating playing this character than he was as Wolverine (in any of the X-Men films). And Gyllenhaal does a commendable job as Detective Loki; playing it cool as he goes about trying to solve the case but kicking ass and taking names when he needs to. 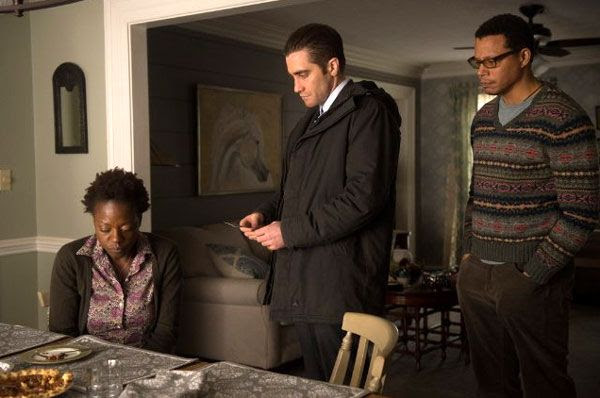 Not to spoil anything, but Prisoners does end in a happy ending...but also on a cautionary note as it shows the pitfalls (RE: dangers) that people face when they try to exact their own form of justice after a crime had been committed. Again, not to spoil anything, but the kidnapper is the one person you'd least expect in the movie. And once that perpetrator is revealed, blood will be spilled, and other innocent people besides the missing girls will be placed in harm's way even till the end credits roll. As mentioned at the start of this review, Prisoners is a terrific film, and the suspense doesn't let up at all in this well-made flick—not even in the very last shot of this movie. Watch Prisoners if you want to see how entertaining cinematic thrillers should be conceived. Carry on. 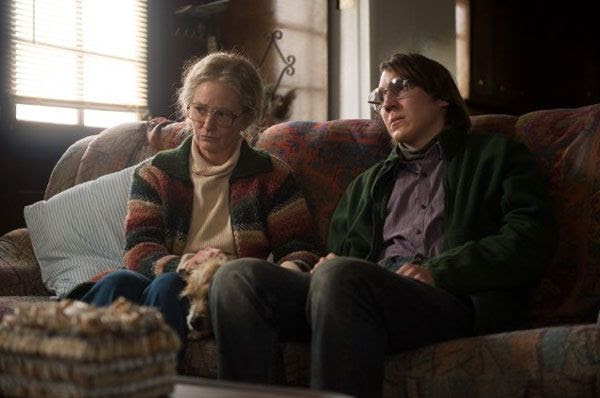 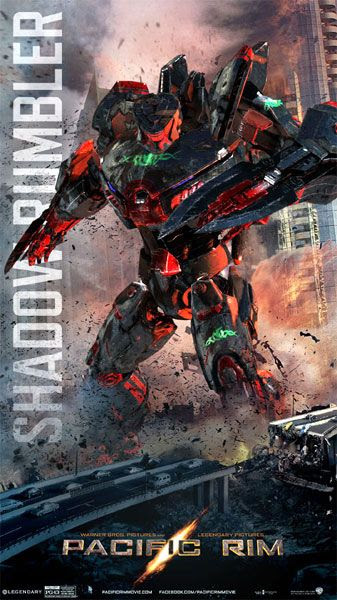 Just thought I'd share these additional posters of the Shadow Rumbler that I had enough free time to create...

LINK: Click here to view all of the Pacific Rim Jaegers that I created 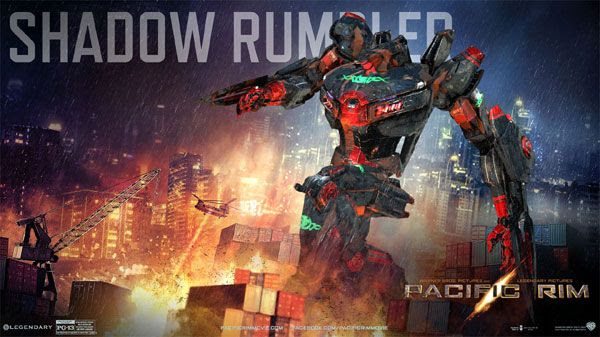 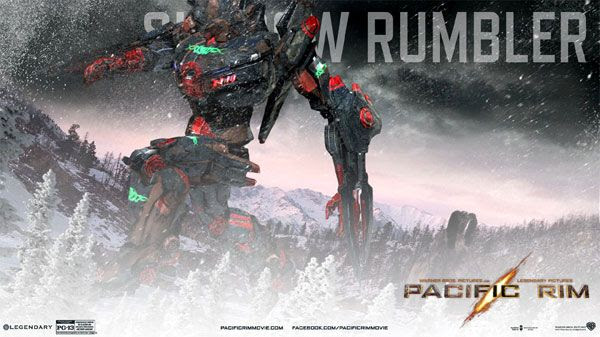 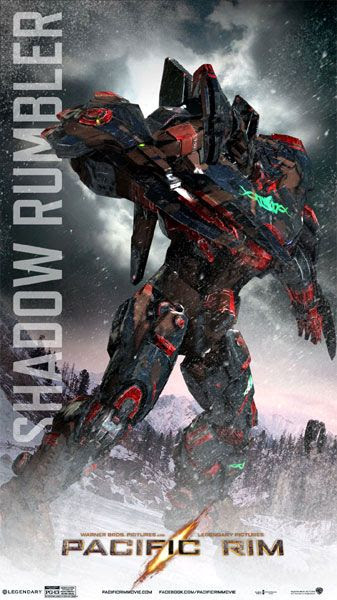 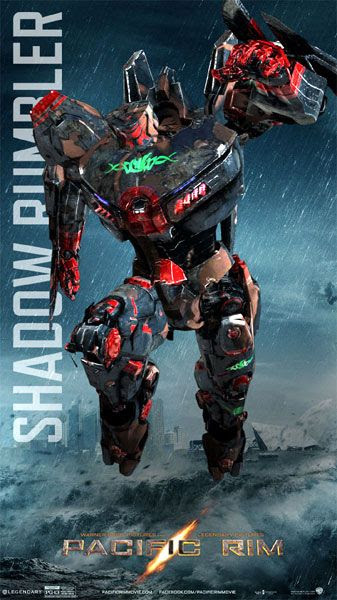 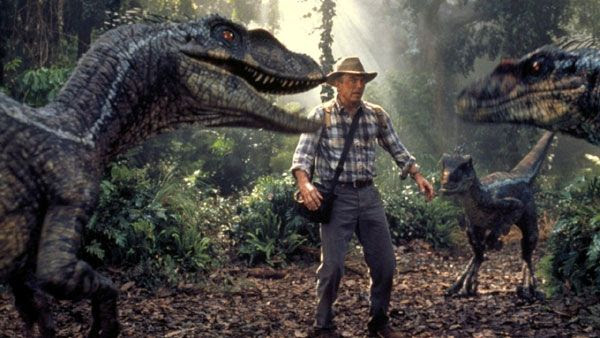 As if 2015 won't be crowded enough with sequels to mega-blockbusters such as Star Wars, Independence Day, The Avengers and Avatar, dinosaurs return to the big screen again (unless you count the Dinobots in next year's Transformers: Age of Extinction) in Jurassic World. This sequel will not be directed by Steven Spielberg (just as how Jurassic Park III was helmed by Captain America's Joe Johnston), but will instead be helmed by Colin Trevorrow—with a release date for this Jurassic Park installment set for June 12, 2015. I'd mention that John Williams should return to do the music score for Jurassic World, but if this in any way conflicts with him working on Star Wars: Episode VII, then I'd suggest that another composer orchestrates the soundtrack for the dino flick instead. Don Davis of The Matrix trilogy scored Jurassic Park III; I have no issues with him returning to the Michael Crichton-inspired sci-fi franchise...not that my opinion on this means anything. That is all. 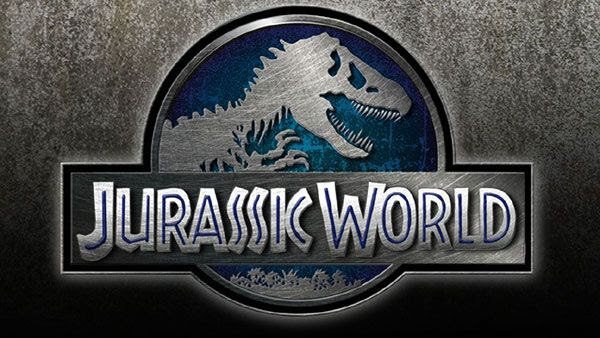 Pacific Rim: My Own Jaeger! 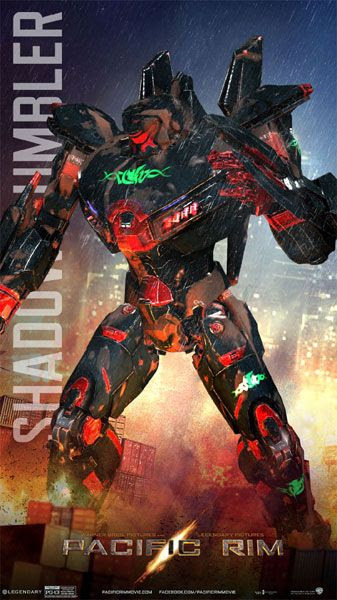 One of my friends just informed me today that I can design my own Kaiju-hunting robot from Pacific Rim courtesy of a special app on the Warner Bros' website. I'll let these posters speak for themselves... So without further ado, I'd like to introduce you guys to the Shadow Rumbler. 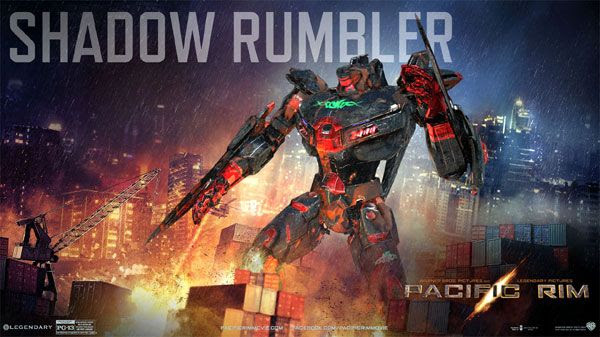 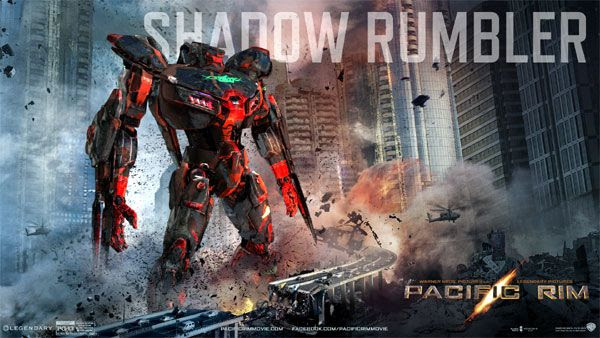 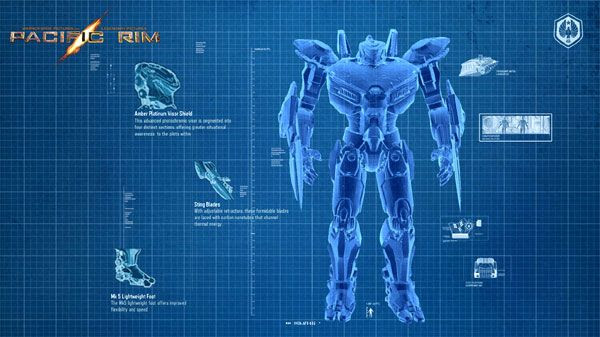 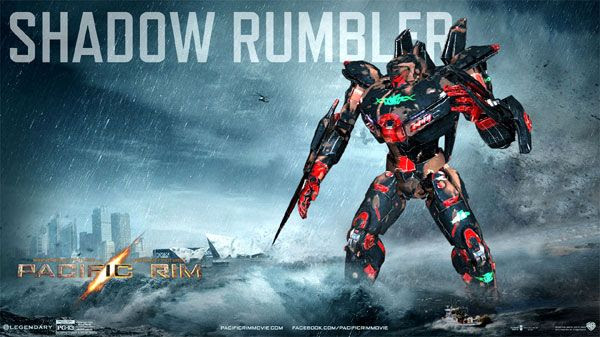 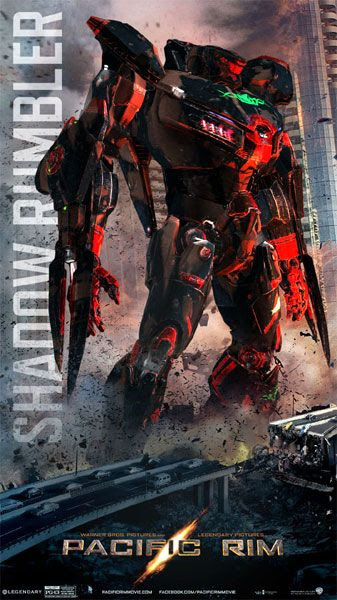 "Dead or alive, you're coming with me." So are the words of Alex Murphy, this time played by Joel Kinnaman and not Peter Weller, in next year's remake of Paul Verhoeven's 1987 sci-fi satire. OmniCorp and ED-209 obviously make an appearance in RoboCop, with Michael Keaton, Samuel L. Jackson, Gary Oldman and Abbie Cornish (of last year's Seven Psychopaths) rounding out a notable cast for the February 2014 film. However, this incarnation of RoboCop is rated PG-13—so it remains to be seen if Murphy's transformation into a law-enforcing cyborg (after falling victim to a car bomb) will be as visceral as watching Weller's version being brutally gunned down by Clarence Boddicker and his gang 26 years ago. Whatever, I'll watch this film...as a 7-dollar matinee at the local theater most likely.

It was officially announced today that the full title for next year's Transformers flick will be Transformers: Age of Extinction. I like the new name (which alludes to the fact that the movie will feature none other than the Dinobots)...though let's not confuse it with Avengers: Age of Ultron. Or the fact that both upcoming films will rely on Industrial Light & Magic for their (awesome) visual effects work. Or the fact that Dark of the Moon and the first Avengers flick had similar plot lines... Carry on. 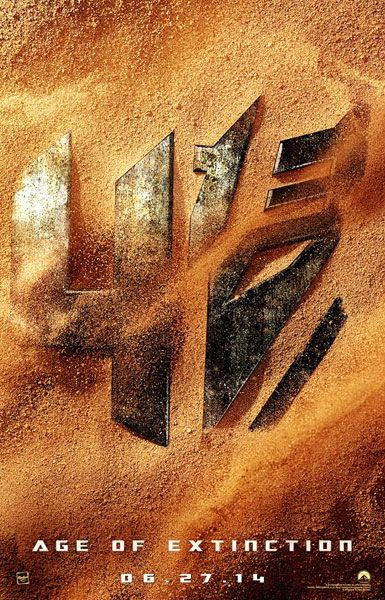