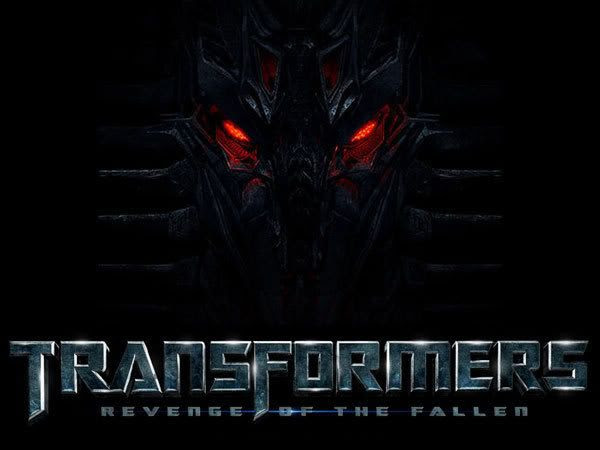 REVENGE IS COMING...to your computer screen if you want. Just thought I’d share this wallpaper that I made on Photoshop using the new teaser poster and official logo. Different sizes are offered. They’re free to download. (Well duh.) 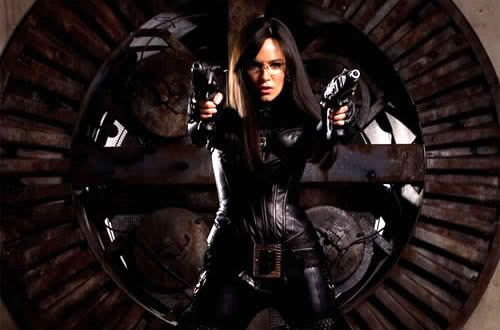 G.I. JOE: THE RISE OF COBRA... 6 new posters depicting characters from the film, which comes out in theaters on August 7, were released yesterday. They reveal (in order of the posters shown below) Storm Shadow, Scarlett, Duke, Snake Eyes, The Baroness and Ripcord. In all honesty, I’ve been hearing nothing but negative things about G.I. Joe: The Rise of Cobra recently...both on and off the Web. But if my thoughts about The Da Vinci Code and X-Men 3 were any indication almost 3 years ago (I actually enjoyed those movies), I’ll probably be pleasantly surprised by The Rise of Cobra since I have absolutely no expectations of it, whatsoever. Haha. Transformers: Revenge of the Fallen on the other hand... 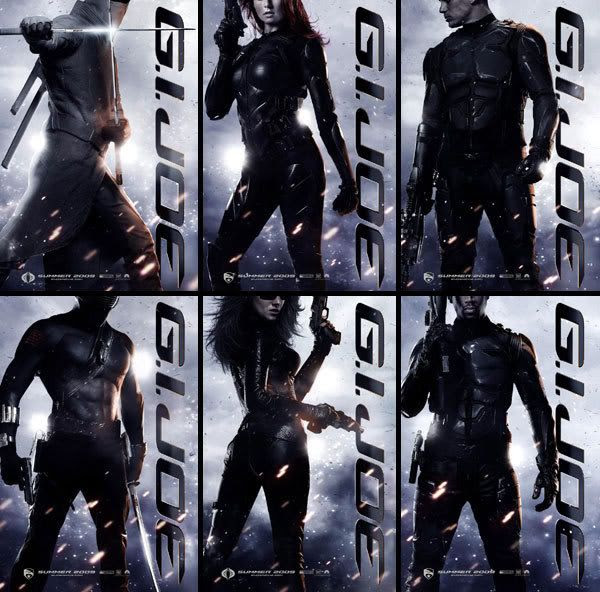 HEATH LEDGER WINS SAG AWARD for Best Supporting Actor... I’m gonna give the Screen Actors Guild a partially-raised middle finger for the lingering threat of a labor strike (yes, this will affect my current job if it took place), but I’ll give them props for giving kudos to Ledger for his work playing the Clown Prince of Crime. The Dark Knight itself won a SAG award for Best Stunt Ensemble in a Motion Picture...which means absolutely nothing when discussing the Academy Awards. But it’s still cool. Speaking of the Oscars, you would think that Ledger winning yet another award for portraying Batman’s longtime arch-nemesis would essentially guarantee a lock for him to win the Academy Award. But think again. As with the case of The Dark Knight getting robbed of that fifth Best Picture slot to a film (The Reader) that got mediocre reviews [but hey(!), it focused on the Holocaust...so it must be meaningful!], you know the Academy of Motion Picture Arts and Sciences is gonna throw a curveball and hand the Best Supporting Actor to someone else. I guarantee it. 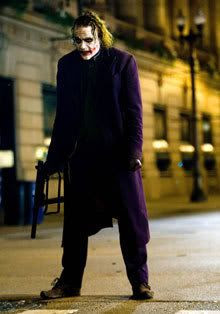 The Academy thinks it’s being unique and prestigious by trying to throw an upset by handing an Oscar to the least-likeliest nominee (you can obviously argue that they're simply handing a trophy to the better film or actor, but in many cases, that's a bunch of BS), but this only makes the organization look ridiculous and elitist (sorry for stating something that was mentioned by others countless of times already) in the eyes of the mainstream public. Shakespeare in Love over Saving Private Ryan, anyone? No wait— I said mainstream. That says it all, right there. Expect me to type a couple more diatribes like this in the weeks leading up to February 22. 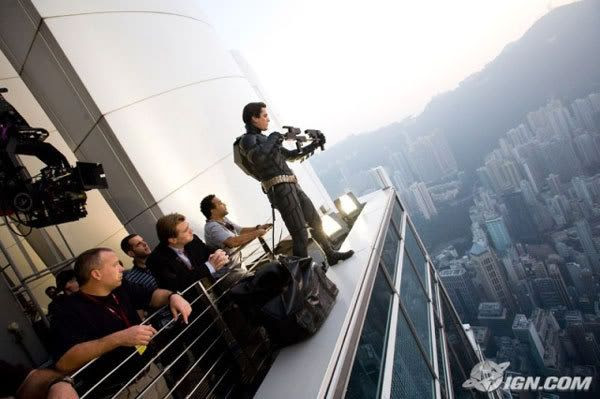 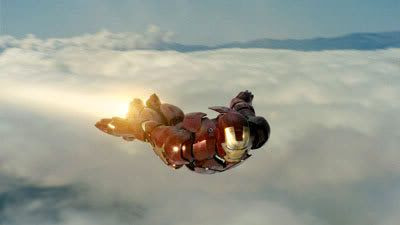 The Curious Case of Benjamin Button garnered 13 nominations to lead all films, though I definitely won’t be surprised if Slumdog Millionaire pulls an upset on winning most of the top categories next month. HOWEVER...the only reason why I’d watch the Academy Awards this year (enjoy your ‘high’ TV ratings on February 22, chumps), is to see who goes up to the podium to accept Ledger’s Oscar (unless the Academy drops the ball on this one too). Christian Bale? Aaron Eckhart? Christopher Nolan (again)? We’ll see.
Posted by Richard Par at 12:59 AM 0 comments 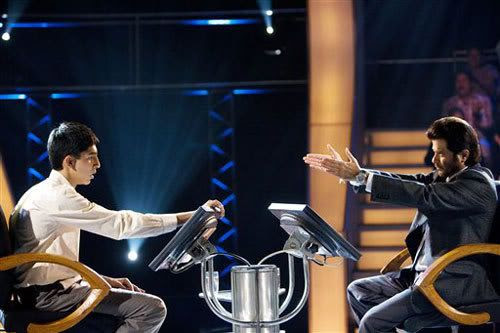 SLUMDOG MILLIONAIRE... I saw the film this weekend, and all I can say is, wow. It definitely deserves to be nominated for a Best Picture Oscar this Thursday (that’s when the Academy announces its nominations). Dev Patel did a great job as impoverished game show contestant Jamal Malik, Freida Pinto was sweet and lovely as Latika, and Anil Kapoor did an amusing take on Regis Philbin by playing game show host Prem Kumar. I’ll never look at Who Wants to be A Millionaire? (the American version, that is) the same way again. As for Salim, Jamal’s brother, I’d say the kid who played the young version of Salim, Azharuddin Mohammed Ismail, did a more memorable take on the character than the actor who played grown-up Salim (Madhur Mittal). No offense to Mittal, who still did a terrific job. 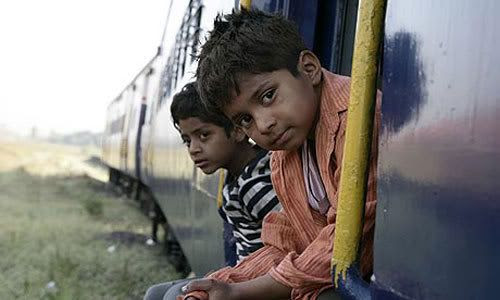 The movie’s premise is intriguing (though the biggest haters of this film would say that it’s really contrived...despite the fact the movie already states at the beginning and end that Jamal’s luck on Millionaire was ‘written’): A contestant being able to answer all the questions presented on a TV game show because he was unwittingly given all (but one) of the answers earlier in his life is funny. The romantic subplot in Slumdog Millionaire is obviously what gives the film its heart...especially at the end. Not to give away anything, but a 'lifeline' not only spells the difference between becoming ultra-rich or leaving empty-handed, money-wise of course, but it also spells the difference between being lonely for the rest of one’s life or finally uniting with your one true love. ‘Kay, now I'm just sounding reeaaally lame. I’ll end it here. 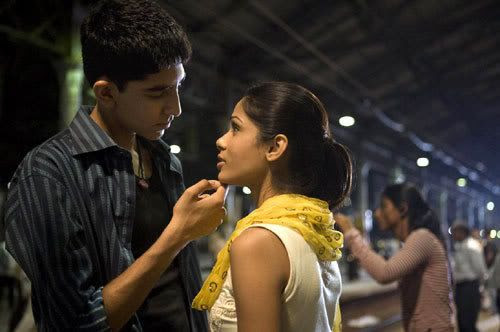 Needless to say, I’m now rooting for Slumdog Millionaire to come away with most of the gold on February 22. Of course, I still want The Dark Knight to get that fifth slot in the Best Picture category. *Crosses fingers.*
Posted by Richard Par at 1:01 AM 0 comments

TERMINATOR SALVATION... Just thought I’d share some cool (leaked) artwork from this May’s fourth installment in the cyborgs-from-the-future movie franchise. These images were actually revealed two months ago, but oh well. These different types of Skynet weaponry look awesome...despite the fact some of them do look like they belong in a Transformers sequel. It’s all good. Giant F*ckin’ Robots... The primary reason why I’m looking forward to both films (the secondary reason for seeing Transformers 2 being Megan— You can finish this sentence). 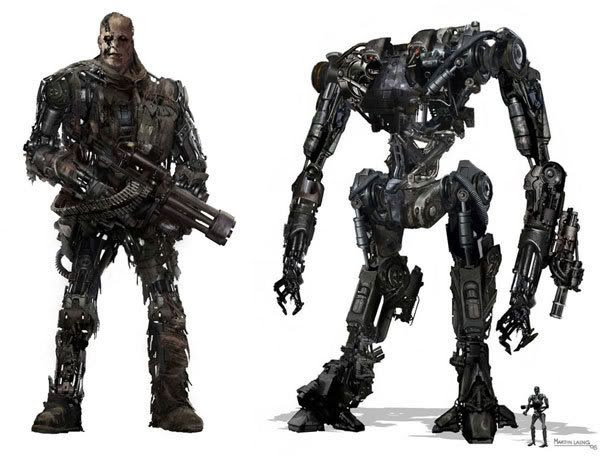 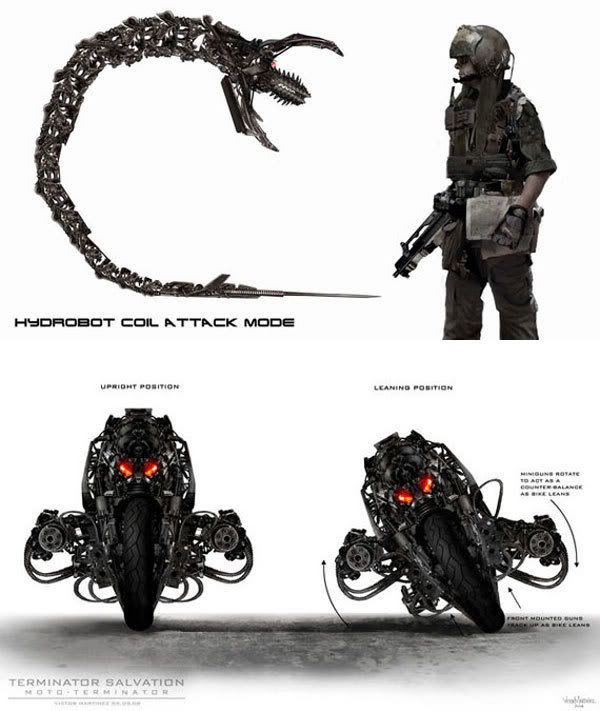 Email ThisBlogThis!Share to TwitterShare to FacebookShare to Pinterest
Labels: Revenge of the Fallen, Terminator

LAST NIGHT WAS A GOOD NIGHT... Jack Bauer returned with a vengeance (even though Tony Almeida technically was the one who was seeking revenge), the Lakers won again [and currently have the best record (30-6) in the NBA. Let's hope they are 32-6 by this Wednesday, after playing against the Houston Rockets on Tuesday and the San Antonio Spurs the day after], and Heath Ledger won the Golden Globe for Best Supporting Actor. It's not an Oscar (yet), but it'll do. 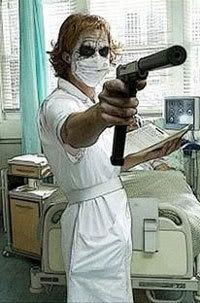 REVENGE IS COMING...to the Super Bowl on February 1st, that is. Or so they say. In the meantime, check out the new official teaser poster for Transformers: Revenge of the Fallen, courtesy of Yahoo!. Ominous. 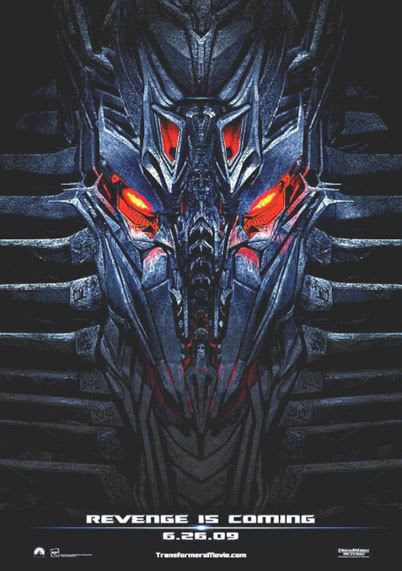