Today I watched Shrek 2 at the AMC theater near my house. Good movie... I found it a lot more enjoyable than the first one (even though I didn't watch the first one till it came out on video). Puss in Boots, the cat assassin voiced by Antonio Banderas, is hilarious! Especially when he sings Ricky Martin's Livin' La Vida Loca. What a crack-up. All the other characters were very funny as well (though not a surprise), but Puss stole the show. I also saw Troy this week. Also a good film, though not very original in the wake of Lord of the Rings and Gladiator four years ago. I saw Van Helsing last week.

So anyways, I enjoyed watching Shrek 2 and Troy. That is all.

Email ThisBlogThis!Share to TwitterShare to FacebookShare to Pinterest
Labels: Gladiator, Lord of the Rings, Movie reviews 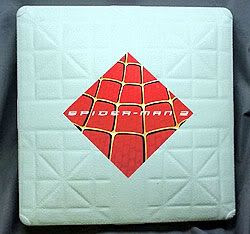 One of the things I learned in my Alternative Media class (the one I'm getting a 'C' in) is how the mass media in the United States cares more about pleasing advertisers and big corporations (the ones financing these media companies) than they do about giving the public what they want... Which is why you'll sometimes find more pages devoted to advertisements than those with actual news printed on them in newspapers like say, the Los Angeles Times. But this is just PLAIN RIDICULOUS.

Put ads on baseball bases? How dumb is that?? What, right before a Major League baseball game cuts to a commercial, the camera is going to focus on these bases? (Which is obviously the point.) "Tonight's baseball game is brought to you by... Columbia Pictures' Spider-Man 2..." Granted, I don't care if the Spider-Man graphic is shown on the TV screen itself, superimposed in front of the image that's being shot, but to have it printed on a baseball base itself? Advertisers will do WHATEVER it takes to promote their product, will they?

Back in the past, and even today, newspapers were afraid to publish certain stories for fear they're going to draw advertisers away...since those stories weren't going to put the consumer reading that newspaper in a "buying mood." Sure, we live in a capitalist society, but that's just plain pathetic.

UPDATE: So much for the Spider-Man-on-first-base idea. The Sports Illustrated website has reported that the MLB will not allow ads for the upcoming film to be printed on any of the bases in major league baseball fields next month. Great decision. A sweet victory for the Average Joe who's against this crass example of advertisements gone awry. Thanks to me and this journal entry. Just kidding.

UPDATE #2: Speaking of Spider-Man 2: Last Sunday night I dreamt I was flying the F/A-22 Raptor jet fighter, was fighting a giant spider in Harry Potter and the Prisoner of Azkaban and was watching an NBA playoff game where the Lakers were kicking the Spurs' ass and not the other way around (check the May 2, 2004 entry). Last night, my dream was a combination of the now-defunct TV show Dark Angel (which aired on Fox from 2000 to 2002) and Spider-Man 2! I dreamt that a couple of people and I had to hide Max (played by the BANGIN' Jessica Alba on Dark Angel) from Lydecker (the main villain played by John Savage on Angel) and Doctor Octopus from Spider-Man 2! At one point, while we weren't running away, I watched as Max and these other people were sleeping on a giant spider-web spun over a street! I think the web was connected to two apartment buildings on both sides of the street...but anyways. It was pretty weird, but a cool dream nonetheless... I think Max got away at the end, and Doc Ock was stuck inside a house or something. Of course, the reason why I had this dream was because I was watching Season 2 of my Dark Angel DVD set yesterday (I have the sets for both Seasons' 1 and 2), and just read the Sports Illustrated article about the baseball bases last night. I know...pretty incoherent journal entry... But this wasn't a coherent dream, now was it?

BATMAN BEGINS: Above are OFFICIAL movie photos of Christian Bale as the new Dark Knight of Gotham! Pictures courtesy of Entertainment Weekly and the official Batman Begins webpage (click on the photos of the new Batmobile below to get to the official site).