BLADE: The Daywalker Is Officially Headed to the Marvel Cinematic Universe...

At Marvel Studios' Hall H panel at San Diego Comic-Con about two hours ago, it was revealed that Academy Award winner Mahershala Ali will succeed Wesley Snipes as the newest daywalker...a.k.a. Blade. A release date for this future vampire-hunting installment in the Marvel Cinematic Universe hasn't been revealed yet—but all I can say is: I CALLED IT!

Who else thinks that Mahershala Ali (#Moonlight, #Alita, #GreenBookMovie) would play a cool "Blade" if Marvel ever incorporates the vampire hunter into the #MCU? pic.twitter.com/gBY7ng1BvK

Earlier today, Tom Cruise made a surprise appearance at San Diego Comic-Con to present the teaser trailer for next year's Top Gun: Maverick. All I can say is...I am absolutely stoked for this film! I've been a huge fighter jet buff since grade school, and to watch a feature-length movie that will put a spotlight on F/A-18 Hornets in combat (Yes, I know— We saw the Hornets in glorious action during such flicks as Independence Day and 2001's Behind Enemy Lines) will get my adrenaline running and put me back in the danger zone again. This is just the teaser trailer, so it'll be a while before we find out if the F-35C Lightning II (the U.S. Navy's variant of the Joint Strike Fighter)—which was declared operational for combat in real life back in February—plays a role in this movie. Anyways, welcome back, Maverick!

Email ThisBlogThis!Share to TwitterShare to FacebookShare to Pinterest
Labels: Back in the Day, Independence Day, Top Gun, Youtube

In honor of Independence Day, here's an amusing image that I found online showing a shot from the final air battle in Independence Day if the hit film was released in 2019, instead of 1996. While I can definitely picture President Whitmore (Bill Pullman) piloting an F-22 Raptor in combat, Russell Casse (Randy Quaid) should've flown the F-35B Lightning II, which he would've hovered up into that alien destroyer's laser cannon to take it out! Like the venerable Harrier jump jet, the F-35B also has vertical takeoff ability...as shown in the photo at the very bottom of this entry. Anyways, have fun cooking barbecue and illegally lighting fireworks in your backyards tonight, fellow Yanks! 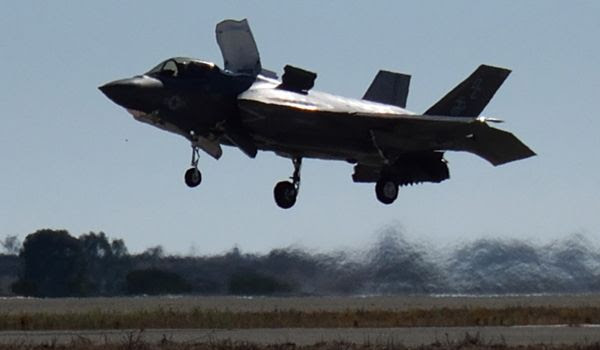