THE SIMPSONS GAVE CREDIT TO THE PREQUELS??? OF COURSE NOT! But today's episode where Bart and Principal Skinner engage in a peanut and shrimp-toting stick fight featured the "Duel of the Fates" music theme from Star Wars Episodes' I and III (and that brief scene of Anakin riding that speeder bike across the Tatooine desert in Episode II). The question is... Will The Simpsons ever make a reference to Revenge of the Sith? And if it does... Will it be a positive reference? Or will Lenny and Carl engage in another mock-lightsaber fight talking about how Revenge of the Sith sucked more than Attack of the Clones and The Phantom Menace (Sith ruled, FYI!)? We shall see... 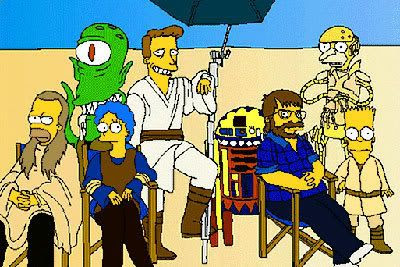 Email ThisBlogThis!Share to TwitterShare to FacebookShare to Pinterest
Labels: Attack of the Clones, Revenge of the Sith, The Phantom Menace
Newer Posts Older Posts Home
Subscribe to: Posts (Atom)