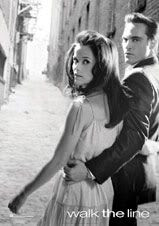 78th ANNUAL ACADEMY AWARD NOMINATIONS... I was gonna write a long-ass Blog about the Oscars mostly to talk about Revenge of the Sith and its many technical nominations (heheh)...but since it got robbed of even the Best Visual FX Award (making this the only Star Wars film to not be nominated for visual effects), there's no need. Sith got nominated for Best Make-up, but the chances of it winning that are nil (considering The Chronicles of Narnia and Cinderella Man have also been thrown into the mix). We all know the cowboy "romance" film Brokeback Mountain is gonna win Best Picture, so let's cut the BS speculation crap on that one. But will Commodus- err, Joaquin Phoenix take home an Oscar for Walk the Line? We'll see. At least ILM got a nomination for War of the Worlds and John Williams got nominated for his score on Munich, but... Bah! No kudos to Rob Coleman and Company for kung-fu fighting Yoda this time around. But Sith did win the People's Choice Award for Favorite Motion Picture and Favorite Movie Drama, as well as the Teen Choice Award for, um, Choice Movie: Action/Adventure. But those awards are meaningless compared to the gold statuette designed by MGM art director Cedric Gibbons (I'm too lazy to elaborate). 'Kay, I'm out. I have better things to do with my time. Like pay off a bill that's due tomorrow. 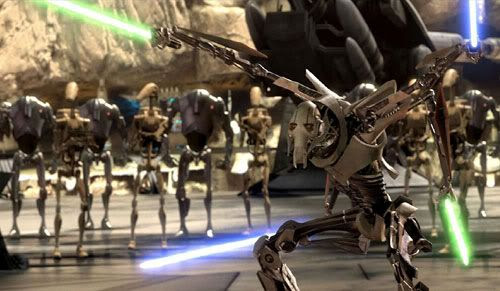 BEST VISUAL FX... General Grievous and Company are out...

EDIT: Hayden Christensen (Anakin Skywalker) gets a Raspberry nomination for Worst Supporting Actor of 2005 (for the record, isn't he the LEAD actor in Sith? He obviously has more screentime than Ewan McGregor)... Razzies.com should be nominated for Worst Webpage of 2005. GOD, that site is slow. And don't tell me it's because a lot of people are actually visiting it.

Email ThisBlogThis!Share to TwitterShare to FacebookShare to Pinterest
Labels: Academy Awards, Revenge of the Sith

Tristan & Isolde... What kind of friggin' title is that?? Oh wait, this story is based on an actual Arthurian legend. Whatever, the title still blows. 'Kay, move along... Move along... 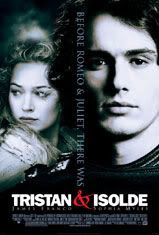