I saw Lord of the Rings again today (one of my brothers wanted to see it) and just wanted to point out that Sean Astin's character IS Frodo's biatch and Cate Blanchett's scenes are a total waste of time...unless Frodo DOES use that bottle that she gave to him in any of the next two LOTR installments. Too bad I won't know till Christmas 2002, not that I'm actually looking forward to THAT epic film, but another one that comes out 7 months before it. 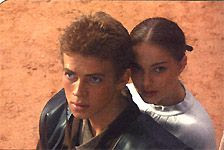 If you don't know what other epic film I'm talking about, then you obviously haven't read my past journal entries.

Email ThisBlogThis!Share to TwitterShare to FacebookShare to Pinterest
Labels: Attack of the Clones, Lord of the Rings, Movie reviews