DID ANY OF YOU see the 8:00 PM episode of The Simpsons today? It spoofed The Phantom Menace with a movie called Cosmic Wars: The Gathering Storm. Despite the fact The Simpsons is like, 5 YEARS LATE in having this major parody...this episode gave a hilarious indictment on the prequels and George Lucas carrying more about digital technology than storyline. Pretty funny. So anyways... General Grievous is gonna rule in Episode III! He's gonna be the NEXT DARTH MAUL! (Thinks about what happened to Maul at the end of Episode I...) No wait...

Don't you guys like it how I always contradict myself over the prequels? One minute I'm calling Lucas a biatch for the failure of The Phantom Menace and Attack of the Clones, the next minute I'm posting up several photos of that General Grievous fella on this page! Make up your mind, Parman! Anyways, it's almost 10:00 at night, and I have to get back to studying!!! But before I do... Here's an old pic of Britney Spears. She can't sing for squat, but I'd still do her. 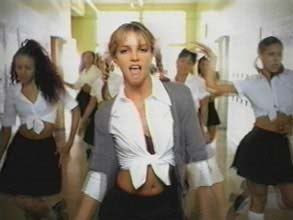