George Lucas is more clever than I thought. For those of you who even care about Episode III coming out next year but don't understand why there's yet another new villain in the final prequel (when Count Dooku from Episode II is still alive and Anakin finally becomes Vader), I found this neat little theory at The Force.Net:

"Many people could not understand the reasons for having a new bad guy, when Dooku was available to be developed as a character. But when you think about it, having Grievous is a logical progression. First bad guy was Darth Maul. Shadowy, silent and deadly. Intense use of the Dark Side. Devoted to his master and to his missions. Second one was a fallen Jedi Master, Count Dooku. Knows the Jedi inside and out. A manipulative and devious character. He can twist and turn people and situations to his advantage. Third one is General Grievous. A cyborg with no pity or remorse. His only purpose is to bring death and destruction to the Republic and the Jedi. If Darth Sidious can combine all these traits into one person, that would be the ultimate apprentice. That apprentice's name would be DARTH VADER."

Pretty cool! Here's a neat fan-made drawing that I also checked out at TheForce.Net: 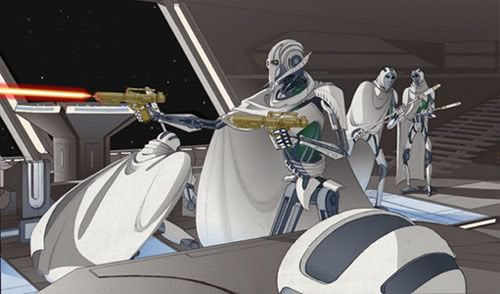