Godzilla vs. Mothra: The Battle For... I didn't type the whole title since I don't know what the whole title is--since it couldn't fit the TV screen when I was watching the movie at one of my friends' house. Anyways, Godzilla vs. Mothra was one of 3 cheesy-ass movies that I watched on cable TV today after my friend and I got back from the Laker training facility in El Segundo (near Los Angeles International Airport)...where I got autographs by Slava Medvedenko and Brian Cook. But NO Shaq or Kobe. Or Payton or Malone for that matter. Could've gotten an autograph by Devean George if he didn't drive off once I walked up to his car window (all the players were already in their cars and there was a pretty large crowd of fans who showed up). Where was I?

Oh yea, I watched Drumline, a movie about freakin' college bands; Kangaroo Jack, a live-action movie about a Kangaroo who wears a red shirt during most of the movie (and talks in one sequence, although that part fortunately passed when I began watching the movie); and of course, Godzilla vs. Mothra: The Battle For Pornography (not the real title, but I didn't feel like typing "..."). These movies, however, were so damn cheesy they were entertaining (and my friend and I watched American Ninja 3 at one point). To sound like a snotty film critic, I was engrossed in their banality...although I'll shoot myself if I ever get the urge to type a screenplay that's inspired by these movies. *Shutters...*

UPDATE: I watched The Apprentice on NBC for the first time today...and needless to say, I was missing out! Great show-- But you know Kwame's team is gonna lose! The Spider-Man 2 trailer wasn't so bad either. 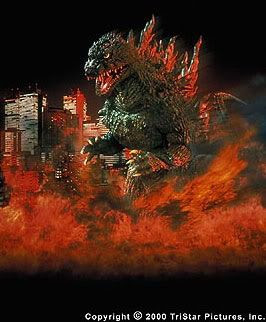