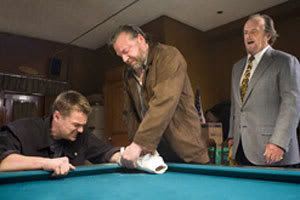 THE DEPARTED... So I saw the film yesterday, and there’s really one thing I need to point out: In the hands of a capable director like Martin Scorsese, violence rocks!! Yes, you heard right... It might be my dark, sadistic subconscience talking...but nothing gets the adrenaline pumpin' faster than having most of the main characters get blasted away at the en— Err, you can finish the sentence. Storywise, I’m well aware that Scorsese actually remade a little Hong Kong film known as Infernal Affairs, but since I didn’t see that movie, I’ll treat Departed as being completely original and kicking ass. Jack Nicholson, unsurprisingly, gave a great, wacky performance as mob boss Frank Castello (especially in that scene where he was giving that little imitation of a rat. Yes, the actual rodent). Matt Damon gave a good, straightforward performance as mob mole Colin Sullivan. Mark Wahlberg gave an amusing performance as trash-talking police investigator Dignam...and Leonardo DiCaprio gave a strong performance as Jack Dawso—err, Howard Hugh—I mean, police mole Billy Costigan. And Martin Sheen and Alec Baldwin were okay, too. So that was Anthony Anderson. And I thought that was Maggie Gyllenhaal who played Madolyn. My bad. It was another lady named Vera Farmiga. 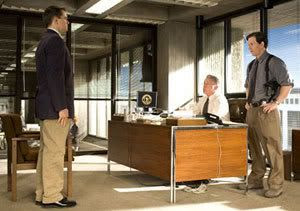 Now that I’m done listing the main cast, what else should I mention? I already pointed out the violence, and how it kicked ass, so I’ll switch to something else. One negative comment I have about the film is that the editing was very haphazard in many of the scenes. Apparently, the script supervisor was dozing off on set...since some of the actors' gestures were inconsistent with the shots that followed the previous ones. In one shot Leonardo Dicaprio will be staring straight ahead at a wall, in the shot after that his head is turned as he is conversing with Martin Sheen or making a move on Vera Farmiga’s character. To the film editor: It must’ve been fun working on the Avid for this film, eh? Anyways, that is the only nitpick I have. Don’t know if this film will be Oscar material for Scorsese, but we shall see... 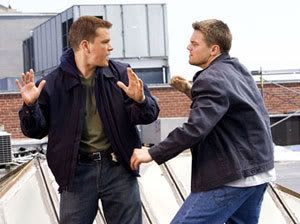