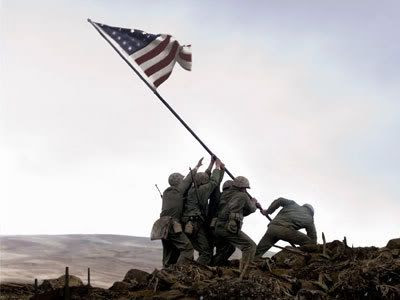 FLAGS OF OUR FATHERS: Blog #2... I saw the World War II epic today, and while it was not as intense as 1998's Saving Private Ryan, it was more moving and emotional. Like Private Ryan, Flags opens up with a modern-day sequence featuring a WWII veteran...who in the Clint Eastwood film recounts the significance of the flag raising photo shot in Iwo Jima. The battle scenes in Flags are just as realistic and gut-wrenching as those in the Steven Spielberg epic. But unlike Private Ryan, the modern-day scenes also take place during the movie...and they are actually pivotal to the story in Flags. The modern-day scenes at the beginning and end of Private Ryan, on the other hand, could've been deleted from that film...which would've probably made the '99 Best Picture nominee a much better movie. It's still a great film, though.

Proof that Flags of Our Fathers was emotional and moving was evident at the finale, when most of the theater audience remained still and silent during the end credits sequence. As the credits rolled, actual photos taken during the Battle of Iwo Jima came up on screen...and it was interesting to see how close Clint Eastwood came to re-creating certain events that took place in the 1945 Pacific conflict.