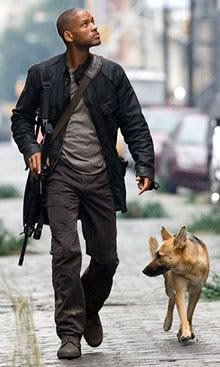 I AM LEGEND... I saw the film last night, and it was pretty good. Kinda slow in some parts, but still pretty suspenseful. I’d have to say the movie reminded me of 2000’s Cast Away and this year’s 28 Weeks Later. It reminded me of Cast Away in that for much of the film, we see Will Smith just milling about...going about his everyday life while traveling with his companion dog Samantha around Manhattan. In Cast Away, we see Tom Hanks milling about for much of the movie while traveling with his companion volleyball Wilson around that uncharted island. I Am Legend reminded me of 28 Weeks Later in that at the beginning of 28 Weeks, we see Robert Carlyle (of The Full Monty fame) hiding with a group of strangers inside a house in the middle of a rural area...with all windows and doors boarded up with wooden planks so the folks will go undetected by zombies lurking outside. Also, Great Britain was quarantined by the U.S. military so that the virus that was unleashed there won’t spread to other countries (which it does...starting with France). In I Am Legend, Will Smith’s house (or should I say, mansion) has all of its windows and doors protected by giant metal shields at night, since the mutants (they’re never referred to as zombies in the film, but they pretty much have the same characteristics as the infected folks in 28 Weeks, and countless of first-person shooter games like Resident Evil) can only go out at night since they’re sensitive to the Sun’s UV rays during the day. They’re "vampire zombies", haha. Also, New York City was "ground zero" for the virus...and was suppose to be quarantined by the U.S. military. But much like in 28 Weeks, the effort in NYC failed. And well... I don’t want to spoil the rest of the movie for ya, but let’s just say that much of Earth’s 6 billion people were infected and killed. This is what I call a holiday film...

Images courtesy of Warner Bros. Studios
Posted by Richard at 10:32 AM