STAR WARS: THE CLONE WARS... Just found out through ComingSoon.net that George Lucas will release the feature film version of the long-awaited television series in North American theaters on August 15. The movie, along with the TV show, take place in the time period between Attack of the Clones and Revenge of the Sith. Unlike the 6 live-action Star Wars films, however, The Clone Wars will be distributed at the cinema by Warner Brothers, and not Twentieth Century Fox. The TV show itself will premiere on the Cartoon Network [which aired 25 "minisodes" of The Clone Wars (hand-drawn) animated series from 2003 to 2005...before Revenge of the Sith came out in theaters], and then followed by airings on TNT.

Of course, unlike the Star Wars prequels, I don’t intend on looking up spoilers for the film and TV show...since they take place during events already conveyed in Episodes' II and III. That, and they’re animated. A CGI version of Padme will not look as sexy as the live-action Padme. Though the CGI version could possibly act better than Natalie Portman did in the prequels. Just kidding. You’re hot, Natalie. 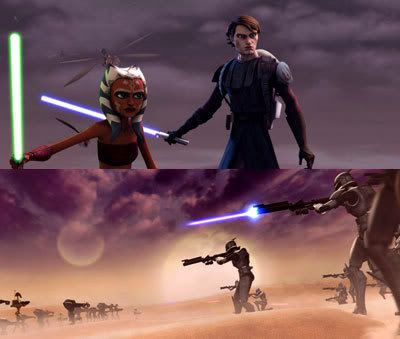 All images courtesy of Lucasfilm Animation
Posted by Richard at 1:20 PM

Email ThisBlogThis!Share to TwitterShare to FacebookShare to Pinterest
Labels: Attack of the Clones, Revenge of the Sith