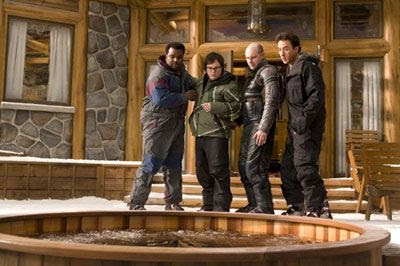 HOT TUB TIME MACHINE... I saw the new comedy flick today, and if you like movies like this one and She’s Out of My League, then you’ll enjoy it. I happen to like these kinds of films, so I enjoyed it! Haha. Craig Robinson (of NBC’s The Office) and Rob Corddry (of...Harold & Kumar Escape from Guantanamo Bay) crack me up, and John Cusack plays his usual role as the level-headed goofball who still happens to get the hot chicks. Speaking of hot chicks, there were many in Hot Tub Time Machine: Lyndsy Fonseca, Lizzy Caplan (of Cloverfield and...HBO’s True Blood. Nice. Google ‘Lizzy Caplan True Blood’ to know why this is nice), Collette Wolfe (who was also in last year's Seth Rogen film Observe and Report), Crystal Lowe (who was in an episode of TV’s Supernatural), Julia Maxwell and Amy Esterle. In case you’re wondering how I know all these names in the film, thank the person who invented IMDb. 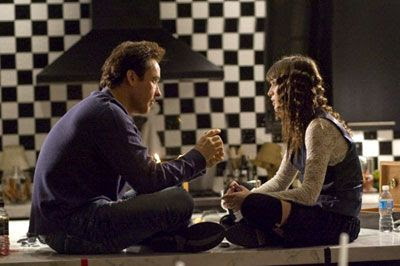 If there’s one lame little gripe I have about the film, it’s that why would Craig Robinson and his friends go into that hot tub when it was in dilapidated condition moments before? Wouldn’t they have found it odd that after finding a dead raccoon in the empty Jacuzzi upon arrival at that ski resort, it’s suddenly filled with warm, bubbling water? And they nonchalantly enter the water without questioning this abrupt change? Hmm. Anyways, as I said before...this gripe is lame. It’s like pointing out why Ricky Ricardo didn’t leave or bitch-slap Lucy after all those screwball moments she had in I Love Lucy, or how Ben Stiller didn't feel that, um, piece of bodily-fluid land on his ear after "floggin’ the dolphin" in There’s Something About Mary. Because they’re freakin’ comedies! That is all.

UPDATE (April 1): Actually, here's a more specific I Love Lucy example: In that episode where Lucy (after getting into a huge fight with Ricky over who forgave first in a previous argument) is wrapped up in bandages inside her bedroom to pretend she was hit by a bus, and Ricky and Fred Mertz stage a fake fire in the apartment so that Ricky can come in and rescue Lucy, and all will be well between them... Wouldn't Lucy have asked a loud "WHAT THE F**K?" when she exits the bedroom, only to see that the apartment was completely unscathed? Wait to think things through on your plan, Fred. And by Fred, I mean the show's scriptwriters. 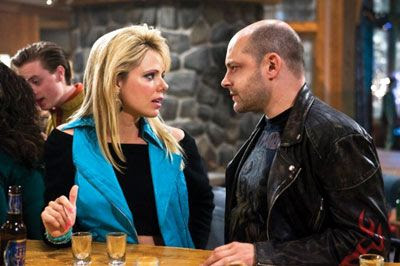 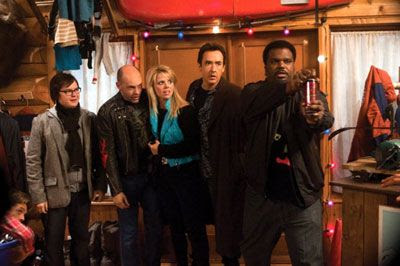