THE POST: "The Press Was to Serve the Governed, Not the Governors." 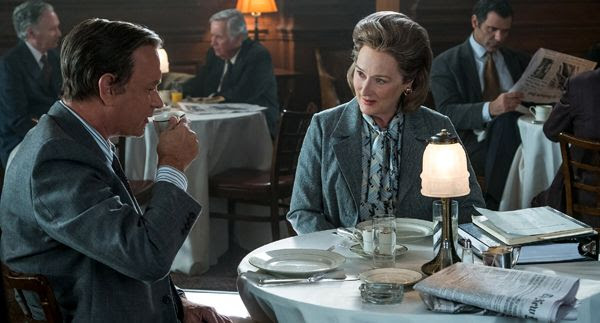 So I finally watched Steven Spielberg's newest film The Post yesterday, and needless to say, it was very eye-opening. This movie deserves to win the Best Picture trophy at the Oscars next month for the sole fact it'll bring attention to the unfortunate reality that history is repeating itself again. But instead of a president trying to bar the media from reporting on a war in Southeast Asia that should never have taken place (and lying to the public about not being a crook, but this was never alluded to in Spielberg's film), we have a so-called leader in the White House who keeps attacking the American press for reporting on the fact that he's a traitor to our country by colluding with the Russians to win the election almost two years ago. And thinks that he's a "very stable genius."

And in case you're about to say that the Academy Awards don't bestow trophies on films for political reasons (and not just because they're well-made movies), look no further than to past Best Picture winners like Spotlight (sexual abuse in the Catholic Church) and The Hurt Locker (the Iraq War). Carry on.
Posted by Richard at 8:57 AM