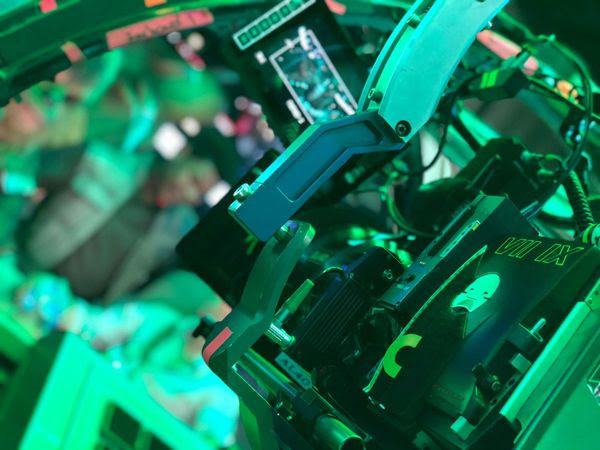 Earlier today, director J.J. Abrams posted the tweet below announcing that principal photography has officially started on Star Wars: Episode IX at Pinewood Studios near London! If you look closely at the photo, you can spot John Boyega (as Finn), Joonas Suotamo (as Chewbacca) and Abrams while he's sitting on the pilot's seat inside the Millennium Falcon's cockpit. In the foreground is Panavision's Panaflex camera that will be capturing Episode IX on celluloid...just like The Force Awakens and The Last Jedi before it. So cool!

Bittersweet starting this next chapter without Carrie, but thanks to an extraordinary cast and crew, we are ready to go. Grateful for @rianjohnson and special thanks to George Lucas for creating this incredible world and beginning a story of which we are lucky to be a part. #IX pic.twitter.com/FOfnGwVut5


The tweet below was my response to Abrams' post. I have no expectations as to how Rey and Kylo Ren will be portrayed in the 2019 installment (except to hope that Rey finally sports a double-bladed lightsaber a la Darth Maul, and Kylo can now shoot Force lightning from his fingertips 'cause that's how Supreme Leaders roll, heheh), but hope that the First Order will finally employ non-TIE Fighters in its arsenal for the final Skywalker episode. Specifically, the Assault Gunboats that I enjoyed fighting in the old X-Wing video game that I play on my laptop. Happy Hump Day!

Hey JJ! Any chance we'll see non-TIE Fighters being used by the First Order in #IX? Please bring the Assault Gunboats to the big screen! :) pic.twitter.com/WXQv5UfPLD

Email ThisBlogThis!Share to TwitterShare to FacebookShare to Pinterest
Labels: The Force Awakens, The Last Jedi, The Rise of Skywalker