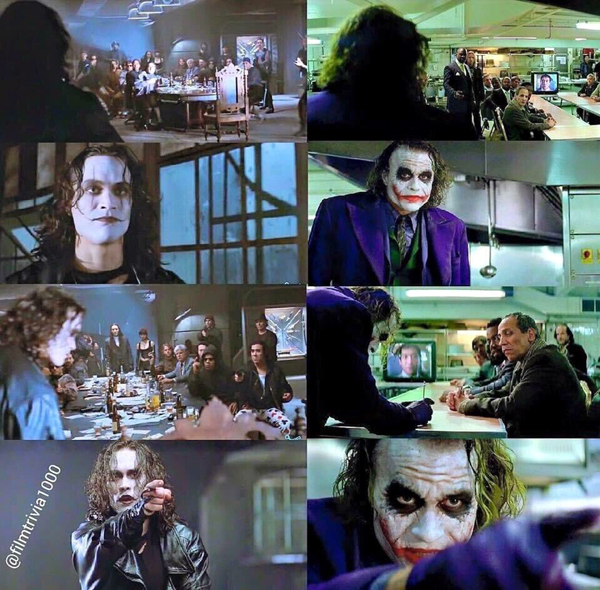 Just thought I'd share this collage I saw on Twitter this past weekend comparing shots from 1994's The Crow with those in The Dark Knight. While I figured that director Christopher Nolan was apparently inspired by the late Brandon Lee's antihero when the look of Heath Ledger's Joker was being created in preproduction, I had no idea that he based one of the most memorable scenes in the 2008 comic book epic to one from the '94 cult classic. (It's been a while since I watched The Crow on DVD.) Well done.

It's sad to realize that comic book fans and movie aficionados need to honor the works of Lee and Ledger posthumously. But I'm just glad that The Crow is recognized as the film that would pave the way for a whole generation of gritty comic book films...with The Dark Knight being the pinnacle of all that is right with this popular genre. Happy Monday.
Posted by Richard at 12:15 PM

Email ThisBlogThis!Share to TwitterShare to FacebookShare to Pinterest
Labels: Back in the Day, Photos of the Day, The Dark Knight