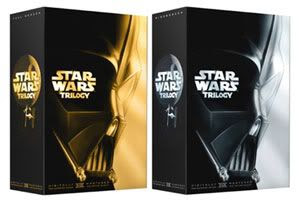 From the TIME.com article previewing the upcoming Star Wars DVDs:

...And the frail 32-year-old (George Lucas) with a galaxy of ideas in his head seems near implosion. As Mark Hamill recalls, "He really looked like he was ready to burst into tears."

As a recent film school grad who had to endure a main actress walking out after the first day of shoot on my senior thesis film Envious last December, forcing to cut short the shoot on the third and supposedly final day of filming because it began raining (and I was filming outside), and being forced to dish out a thousand dollars more for my pick-up shoot (which I couldn't do till 6 weeks later because of winter break and legal reasons with the film department), I think it was that comment made by Hamill which convinced me why Lucas should do everything he could to have these films meet the vision that he originally had for them.

The TIME article points out that the 1977 version of Star Wars was a joy for fans but a reflection of the anguish Lucas went through to make it. While most of my actors and close friends say that they (supposedly, heheh) enjoyed my film after I gave them copies, I myself am reminded, when I watch my own film, of how pissed I was (and don't ask me about the tears part) when it began raining during my shoot...and of other things I wish I could do to fix my film (such as stick to using ONE film stock as opposed to two because of continuity reasons, and not having a main character wear something drastically different from what they wore at the start of the film since the audience won't know that that's suppose to be the same character from the previous scene).

So more power to Lucas. Don't let the nostalgia of people who obviously weren't on set to help you get this movie made (but those are the people that made Star Wars popular!! Well woopty-friggin' doo) prevent you from fixing something that you struggled to make in the first place.

The bottom line: Creating a film is a highly emotional process that most non-filmmakers can't completely appreciate.

Update: And yes, I found a replacement for that actress...6 HOURS before I was to begin Shoot Day #2!
Posted by Richard at 10:43 PM