So I was watching the TV show House on FOX last night, and they showed a Victoria's Secret commercial that used a clip from the music score of Gladiator (the track "The Might of Rome", to be exact...if you have the soundtrack CD). The point of this journal entry: Who would've thought the soundtrack to an epic, Oscar-winning film could be used for a lingerie commercial? Nice! I always knew Hans Zimmer's music was good enough to be used for other things (like the Crimson Tide score being used for trailers to other movies such as 1996's Independence Day, and the main theme of Gladiator being used in the NBC promo of one game during the 2000 NBA Finals), I just didn't know it could be used to sell bras and thongs. 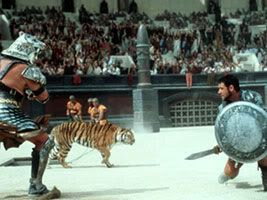