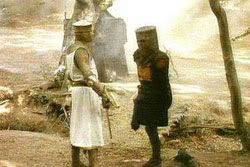 "WHAT! JUST A FLESH WOUND." This weekend, I watched the movie Se7en and one of the funniest parodies of all time... Monty Python and the Holy Grail. Se7en was pretty good (yea, I know I know... You can't believe I saw this film just now), though for some odd reason having Kevin Spacey as the John Doe killer kinda took away from the story—to me, at least. I didn't know he was in the film till I saw him in it, and then checked his name on IMDb.com's Se7en page (though there's something about the way I worded this that sounds...odd). Perhaps the reason why I was thrown off is because Spacey always seems to play mastermind criminals (Se7en, The Usual Suspects) or weirdos (American Beauty, K-PAX) in his films. Though I do believe he was an alien in K-PAX. Dunno, never saw that film, haha. But Se7en was good. I think it was a wise decision not to show Gwyneth Paltrow's head in that cardboard box at the end. ... Oh wait, did I spoil the conclusion for you? 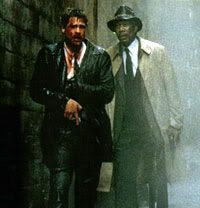 In terms of Monty Python and the Holy Grail... HAHAHAHAHAHAHA! That is one of the stupidest and most hilarious movies of all time!! I like it!! Highlights from this film: The Knights of the Round Table "riding horses" (Do you like coconuts?), the Killer Rabbit who mauls most of King Arthur's men near a cave, the black-suited Knight who fights to the last limb (literally... See the two pics I posted in this journal entry), and the "Holy Hand Grenade of Antioch." And this is barely scratching the surface! I forgot to mention the cartoon Monster who chases after the Knights inside another cave, only to perish when the Monster's animator dies of a heart attack, and one of Sir Robin's men singing a song that pretty much calls Robin a pansy when he refuses to fight a 3-headed knight. You'd have to watch those scenes to appreciate their hilarity... And don't forget the Knights' musical number about Camelot! Yep, Monty Python cracks me up! I just might buy it on DVD. But not now. I have to pay for a new set of contact lenses tomorrow. "We want a shrubbery! Ni!" 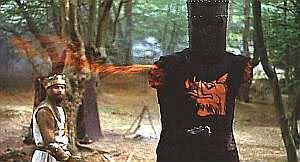 "I don't want to talk to you, no more, you empty-headed animal, food trough wiper. I fart in your general direction. Your mother was a hamster and your father smelt of elderberries."

"Ha ha! Hello! Smelly English K...niggets ... and Monsieur Arthur King, who has the brain of a duck, you know."

"I wave my private parts at your aunties, you brightly-coloured, mealy-templed, cranberry-smelling, electric donkey-bottom biters."

"No chance, English bed-wetting types. We burst our pimples at you, and call your door-opening request a silly thing. You tiny-brained wipers of other people's bottoms!"

"Yes, depart a lot at this time, and cut the approaching any more or we fire arrows into the tops of your heads and make castanets of your testicles already."