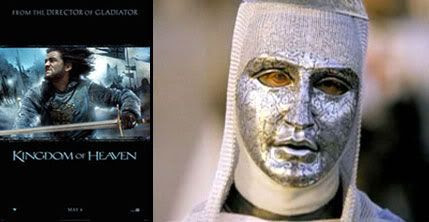 Kingdom of Heaven. I watched the new Ridley Scott film at a press screening in Pasadena yesterday... It was good, and you can obviously say that it's an unofficial sequel to Gladiator, haha. But I still like Gladiator over this one, since that film was more original (to me, at least. I still haven't seen Braveheart), and Hans Zimmer's music on the 2000 Oscar winner was definitely a lot more memorable (no offense to the dude who did KoH's score). Also, Kingdom of Heaven would've seemed a lot better had it not been the umpteenth sword-and-sandal epic to come out over the past 5 years...behind Gladiator, Lord of the Rings (specifically The Two Towers and Return of the King), Arthur or King Arthur or whatever and Troy. But still, the film was a'ight.

DON'T get me started on Orlando Bloom and him being the Typecast King, though. Why is he the Typecast King, you ask? Well let's put it this way: He wields a sword in almost every film he's been in over the past half-decade or so (with the exception of 2001's Black Hawk Down), and he played a blacksmith in both 2003's Pirates of the Carribbean and Kingdom of Heaven. 'Nuff said.
Posted by Richard at 11:28 PM

Email ThisBlogThis!Share to TwitterShare to FacebookShare to Pinterest
Labels: Gladiator, Lord of the Rings, Movie reviews