KUNG FU HUSTLE! I watched the movie on um, DVD last night...and I thought it was pretty good. As usual, the action scenes were cool, and the climax reminded me of something straight from DragonballZ, haha. Did they have to have those gratuitous butt shots of that one FOB dude though (in case you haven't checked my main website out yet, I'm Asian...so I can use that acronym, lol), especially since none of the female characters show T & A? Oh well. I like how the 'chosen one' theme was played out in this film. And yes, it had several funny moments (like the Axe Gang breaking out into a dance number after slaughtering another gang outside a police house. Actually, that's pretty sadistic...which makes it funnier). Quite entertaining... Then again, I'm a lousy film critic. (Just read my previous entry: "I’m 9 days late, but on April 3rd I watched Sin City. So what did I think? It was good.") 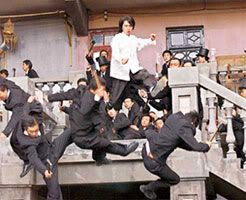