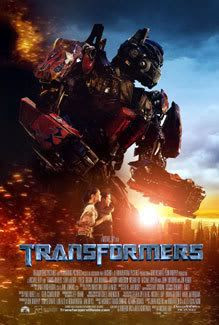 TRANSFORMERS 2: (OPTIMUS PRIME Opening Narrative) "It has been one year since the loss of The Cube. Because we, the Autobots, can no longer revive life on our home world of Cybertron, we have had to rely on a vessel, known as The Ark, to ferry us across the stars...in search of a new haven. Our search has now come to an end, with Earth as our final refuge. While we were able to coexist with Earth's inhabitants, our enemies have found their own motive to come to this planet. A motive...that involves causing endless death and destruction to this world... And we must stop them before it is too late."

Megatron gets located and retrieved from the ocean floor to get repaired on by Decepticons still loyal to him...while Starscream returns with his own followers to wreak havoc on Earth. The Constructicons and Soundwave are among the new baddies to show up. Sam and Mikaela's relationship is expanded upon; Jazz is brought back to life by Ratchet; more Autobots arrive on Earth (via The Ark) to help Optimus Prime and Company prepare for the growing Decepticon threat. Megatron gets revived as Galvatron...and in an Empire Strikes Back-like dark ending, shows how powerful he is by killing off, with only a few blasts of his giant cannon, Starscream and his followers, a large metropolis full of humans...and even Optimus, Ironhide and some main Autobots in an "Are they really dead?" fashion. Sam and/or Mikaela are also injured during the final battle...and are evacuated just as Galvatron prepares to destroy unnamed city (for some odd reason I'm picturing Chicago). Ultra Magnus and other Autobot reinforcements arrive on Earth in the final scene. Barricade (the Decepticon police car in Transformers) shows up for the final battle, but mysteriously disappears for no apparent reason.

TRANSFORMERS 3: A la Gandalf in The Lord of the Rings, Optimus Prime is revived and becomes more powerful than ever. Unicron arrives to join in the Decepticons' conquest of Earth. More stuff on Sam and Mikaela's relationship as they recover from the previous film's injuries. A HUUUUGE WORLDWIDE/SPACE BATTLE between the Autobots and Decepticons ensue...Unicron is destroyed in the process...and Optimus Prime makes up for being a weakling in the first film by beating the crap out of and defeating Galvatron in a climactic fight between the two. Barricade again shows up for the final battle, but mysteriously disappears for no apparent reason.

Sam and Mikaela get married in the final scene with Bumblebee as the best man. Just kidding 'bout this last one...or am I?

EDIT: Are Autobots voyeurs? You be the judge... (Why else would they have their headlights on?)