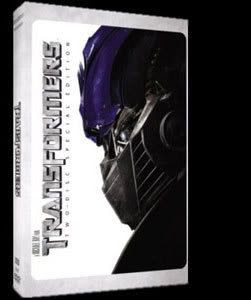 TRANSFORMERS: THE DVD... Days after word got out that Steve Jablonsky’s original film score for Transformers will be sold in stores starting October 9, news has been released that the movie itself will be coming out on DVD a week later! Woohoo! Can’t wait... Transformers will be released on standard DVD and HD DVD versions. Those of you who want a Blu-Ray copy of the movie will be left hanging...as Paramount and Microsoft made a deal a few weeks ago to have Paramount movies released exclusively on High Definition for at least the next 18 months. This originally prompted director Michael Bay to get peeved at the "one format only" approach and threaten to walk out on helming Transformers 2, but had a change of heart after watching the movie 300 on HD DVD. Sigh... What a relief. For those of you who want Bay to come back for the sequel, haha. 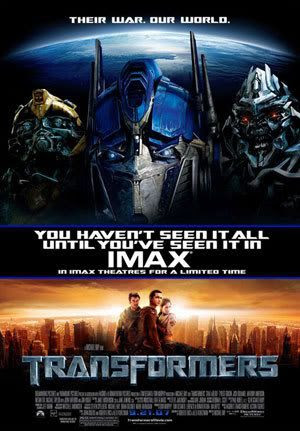 TRANSFORMERS: ON IMAX... On September 21, the sci-fi blockbuster will be briefly released on 70mm theatrical projection...complete with two extra minutes of new footage! Either it’ll be a prolonged version of Sam and Mikaela making out on top of Bumblebee’s hood, or we’ll finally get to see what happened to Barricade (the Decepticon cop car) towards the end of the film. Like I said... Can’t wait!

Email ThisBlogThis!Share to TwitterShare to FacebookShare to Pinterest
Labels: 300, Revenge of the Fallen, Transformers