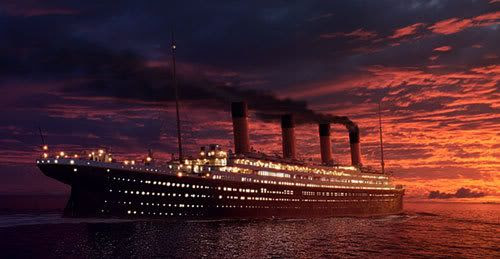 TEN YEARS AGO TODAY, the movie Titanic came out in theaters nationwide. The reason why I’m bringing this up is because the film was pretty popular during my senior year in high school. Even dudes who looked like gangmembers in my class say they saw the film at least 4 times at the multiplex, haha. No BSing. James Horner's orchestral score for the film was sold out for weeks at music stores everywhere (at least the compact disc version), and so was the "James Cameron’s Titanic" movie book (um, published by HarperPerennial) at major stores like Borders and Barnes & Noble. Also, Celine Dion’s hit song "My Heart Will Go On" was freakin’ being played on the L.A. radio station KIIS FM every other hour (okay, maybe I’m exaggerating with that part). The reason why I watched the flick in the first place was because my British Literature teacher (who worked at a Barnes & Noble bookstore and was able to hook me up with a copy of "James Cameron’s Titanic") was giving extra credit if my class showed him our ticket stubs. So how many times did I watch the 3-hour epic, you ask? Well let’s just say...the only other movies that I saw more than the 1998 Best Picture winner was The Phantom Menace (Hey, it was the first Star Wars film in 16 years. In fact, many Star Wars fans thought that Episode 1 was gonna surpass Titanic’s $600 million domestic box office gross. They were off by around $170 million), Revenge of the Sith and Transformers. How many times did I watch these three films, you ask? No comment.

Next year marks 10 years since I graduated from high school. I have no idea who’s planning the class reunion. Of course, in the Age of MySpace, Friendster and Facebook, are reunions even practical now? We may not see old classmates in person ever again, but at least we know what they’re up to by visiting their profiles on these websites (assuming they haven’t made their pages private, of course). Anyways, just felt like being nostalgic. That is all.
Posted by Richard at 10:30 AM

Email ThisBlogThis!Share to TwitterShare to FacebookShare to Pinterest
Labels: Back in the Day, Revenge of the Sith, The Phantom Menace, Titanic, Transformers