BARRICADE ON THE MOVE... The pics above have been making rounds around the Web last week, with speculation that Michael Bay might be starting some form of filming on Transformers 2 soon despite the fact principal photography isn’t officially set to commence till June 2. These Saleen Mustang prop cars of Barricade—who can safely be presumed to have survived in the first film, since he completely disappeared following Optimus Prime’s defeat of Bonecrusher on that freeway—were seen on a trailer truck in Culver City (where Sony Studios is located, and is around 40 miles from where I live). Of course, the pics above could've been taken during the first film's production back in 2006, but whatever. When was the iPhone (which supposedly was used to take these pics) released?

Bay starting filming sooner than expected would be understandable, since I read in today’s Los Angeles Times newspaper that there is a significant chance the Screen Actors Guild might go forward with a labor strike in June. Freakin’ unions. So it may be a while till we see leaked photos of Megan Fox looking hot once again for the sequel. Wait— She’s returning, right? I hope so. 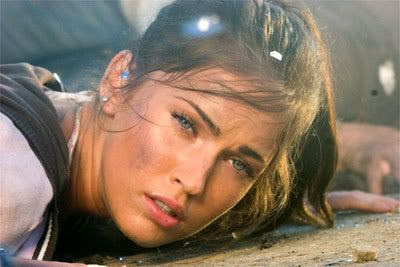