G.I. JOE... SuperheroHype.com posted two new images from next year’s action-adventure film, which is being directed by The Mummy's Stephen Sommers. It will be one of two movies based on Hasbro toys to come out in 2009, along with (hopefully) Transformers 2. That’s assuming a strike by the Screen Actors Guild doesn’t take place this June...when filming for the Michael Bay sequel is scheduled to commence. The photo below is of the mercenary ninja Snake Eyes...who is being played by Ray Park, of Darth Maul fame in The Phantom Menace. Looks cool. 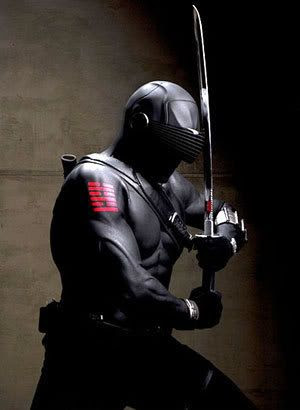 Email ThisBlogThis!Share to TwitterShare to FacebookShare to Pinterest
Labels: Revenge of the Fallen, The Phantom Menace