MEGAN, MEGAN, MEGAN... Yesterday, Shocktillyoudrop.com and other websites released candid photos of Megan Fox showing some skin for her upcoming film, Jennifer’s Body. In this flick, Ms. Fox plays a cheerleader who becomes possessed and kills her male classmates. She uses her sexual prowess to seduce guys before she makes them sleep with the fish (just thought I’d place a Godfather reference in here). Does this sound familiar? Think back to Species and its two sequels, where Natasha Henstridge—and then Sunny Mabrey—go nudesy many times before killing their male prey. The only difference, other than being aliens-in-disguise in the Species films, is that Henstridge and Mabrey completely bare it all for their roles. Fox, on the other hand, is wearing pasties to cover up her goodies in these new pics. Don’t worry, though. One of these days The Foxy One will deliberately pose in the buff...and at the beach nonetheless, like Vanessa Minnillo (and Natalie Portman, Alyssa Milano, Courtney Cox, Kate Moss, Anna Kournikova, Cameron Diaz, Sienna Miller, etc...). 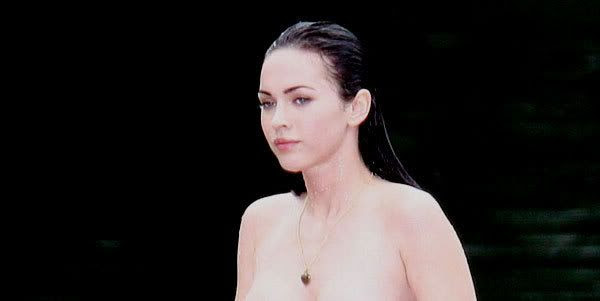 By the way, I’m well aware of the contrast between all the space-related stuff at the top of this page, and me trying to sound like Perez Hilton (minus the goofy hair and effeminate personality) here. That’s all. You think Shia LaBeouf is hoping Michael Bay has a similar scene for his co-star in Transformers 2?
Posted by Richard at 1:42 PM