IT IS ARCEE! Or maybe not. Overlooking the fact she’d get a severe windburn if she actually drove a cycle in that outfit (well, it’s either that or receiving a mad carpet-burn...which Ms. Fox must’ve gotten a couple of times ‘cause she’s crazy like that. Do I really need to elaborate?), Megan Fox somewhat fulfills what some Transformers fanboys (and...girls?) are hoping to see in the sequel: Mikaela riding through the streets of some fictional city on a bad-ass motorbike during a big action scene in Revenge of the Fallen. This photo, which was shot prior to the production entering a temporary hiatus on June 26 to prepare for a potential SAG strike—which hopefully won’t happen if AFTRA’s new deal with the studios receives a "yes" vote tomorrow—shows Sam Witwicky kissing his girl goodbye on the Princeton University campus. Rumors go that this scene will take place at the end of the film. That goes with Michael Bay’s remarks that TF2 is a stand-alone sequel (with everything being all fine and dandy in the finale if the photo below is any indication), and won’t have a "bullshit" cliffhanger that paves the way for a third film. But there will be a third film, right? Right? 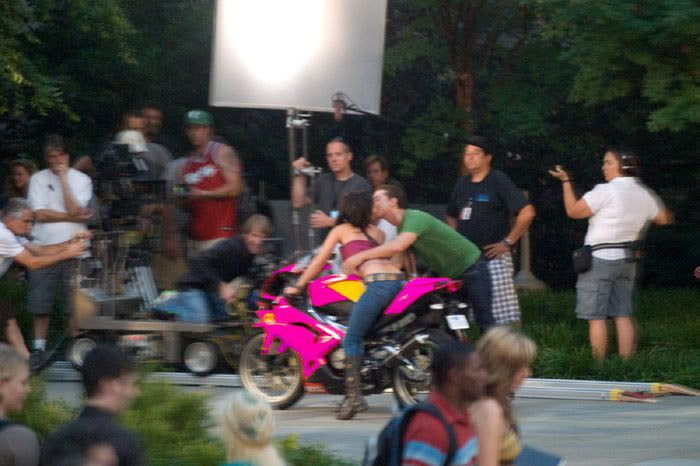 The original photo shows Mikaela straddling—I mean, sitting—atop an orange Aprilia RS125 motorcycle. Arcee, on the other hand, is supposed to be a custom-made pink or purple bike made by the company RetroSBK. So why is the cycle in this image pink, you ask? ‘Cause Photoshop rules. 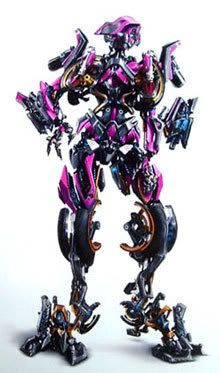