STEVE JABLONSKY BACK FOR TRANSFORMERS 2... For those of you who’ve been visiting this Blog since at least last summer, you probably saw a couple of journal entries where I expressed my frustration over the fact the Transformers orchestral music score wasn’t released around the same time as the movie. The score was eventually released on October 9 of last year, and it did not disappoint. The music for Transformers is one of my favorite all-time movie scores...if NOT my most favorite film score, ever. Yes, you heard right. Sorry to say that, John Williams, James Horner, Don Davis, Danny Elfman and Hans Zimmer (though Jablonsky is a protégé of Zimmer... By the way, gotta remind myself to buy The Dark Knight score sometime this week).

Anyways, to finally get to the point of this entry, The Knight Shift mentioned that Jablonsky will return to conduct the music for Transformers: Revenge of the Fallen. Can’t wait to see what awesome new tracks he’ll conjure up. The Decepticon theme in the first film was cool, but I’m wondering if Jablonsky will come up with a more sinister theme for the bad guys that rivals the majestic-sounding piece he did with the Autobot Arrival scene. Let’s wait and see. And here’s hoping the music for Revenge of the Fallen actually comes out around the same time as the film! It would be kinda whack if fans had to resort to filling out a petition just like they (or we) did for the first score last year. With the exception of Linkin Park’s "What I’ve Done", screw the Transformers soundtrack (not score. There’s a difference)!! Half the songs on that CD weren’t even in the movie, anyway...

By the way, Jablonsky is also scoring the music for the XBox video game, Gears of Wars 2. The first game kicked ass! Must I actually buy an XBox to hear what Jablonsky will come up with for the sequel? Naaah...

On a different note, here’s a photo of Megan Fox from the set of Revenge of the Fallen on Tuesday. Filming was done at Venice Beach in California. Too bad the production wasn't at Huntington Beach instead. I live a lot closer to that area. 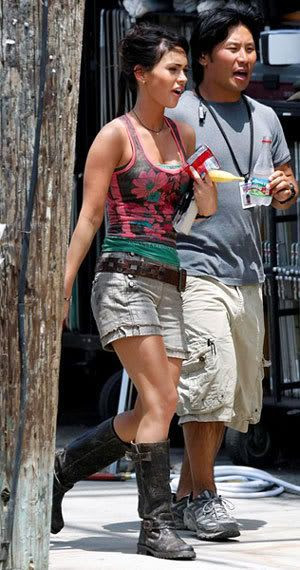