AS JUNE 24 fast approaches, more Revenge of the Fallen-related goodies will be publicly released (and I'll be devoting more journal entries to them, haha). Above are three character posters that showed up on Yahoo! Movies yesterday. My favorite one is the poster for Starscream...since he didn’t have his own character sheet for the first film. This obviously means ol’ Screamer will have more screentime in Transformers 2. Awesome. What are the chances that we’ll also see sheets for the new characters, like Sideswipe, Soundwave and/or The Fallen? One can only hope...if they’re lookin’ forward to TF2, that is... Which I hope they are. Yep.

Below is a fan-made poster courtesy of 'artisttheone' on the Don Murphy message board (Don is one of the producers for the Transformers films). Pretty cool...but where's Mikaela? On that motorcycle? 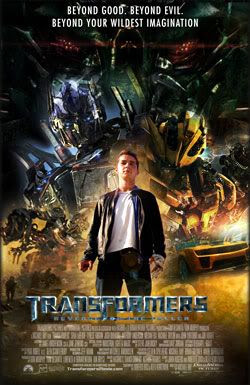