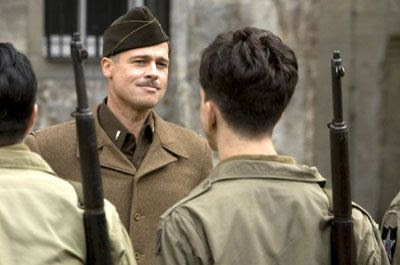 INGLOURIOUS BASTERDS... I saw Quentin Tarantino’s latest flick last night, and I must say, it was a pretty good film. As a whole, that is. Before I get to the positive aspects of the movie, here are a few gripes I have about it: 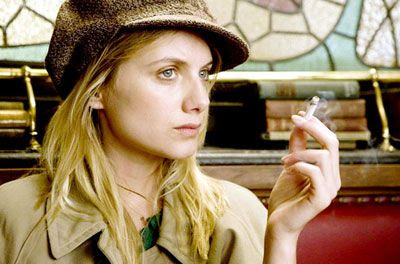 -Inglourious Basterds at times felt like it was a film history course disguised as a World War II flick. The gist of some of the scenes: "Hey guys, I'm letting you know that old movies were once printed on lethal, explosive material that was projected at theaters! Google 'silver nitrate film' to know what I’m talking about! Oh, and look up 'Marlene Dietrich' on Wikipedia while you're at it."

-I obviously understand that Tarantino's signature trademarks in his movies are long scenes with witty dialogue in 'em. However, the long scenes in my opinion were only interesting when they dealt with German SS officer Hans Landa (who was terrifically played by Christoph Waltz. More on him later). The opening scene with him and that French dude at the farm was pretty intense. For other scenes with other characters, though, I was thinking, "Get to the f***in' point!"

-I was waiting for Mike Myers to break out with a "Yeeaaah baby, yeeaaah!" during his brief cameo. Though I will admit he still did a nice job keeping a straight face as the British general. 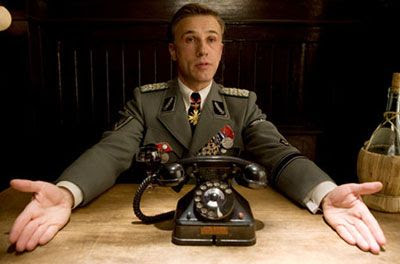 Now onto the positive parts:

-Christoph Waltz = A recipient of the Best Supporting Actor award next year (for both the Golden Globes and the Oscars)? His character may have had an extremely sudden change of heart at the end of the movie, but Waltz sure did an AWESOME JOB playing this Nazi "Jew Hunter".

-Brad Pitt totally kicks ass. He was amusing in the Oceans film trilogy by Steven Soderbergh, though I never saw The Curious Case of Benjamin Button last year. I was rooting for Pitt's Aldo Raine (a.k.a. "Aldo the Apache") to "kill some Nazis" whenever he showed up on screen. Carving swastikas into Germans’ foreheads was kinda cool too. And when he said he "wanted the scalps of a hundred dead Nazi soldiers", Raine wasn't joking.

-The guy who played Adolf Hitler should get props for his performance. Hell, everyone in the film should get props for making the movie feel more authentic with their all-out French and German conversations... They put the 'British-accents-on-Nazi-soldiers-'cause-Tom-Cruise-can't-speak-German-for-s**t' aspect of Valkyrie to shame. 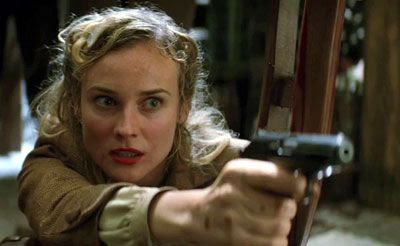 -That was ONE COOL way of fictionalizing the end to the European front in World War II. Two Jewish "Basterds" blasting away at Hitler's corpse and hundreds of hapless German moviegoers inside that French theater = WIN. And what Aldo the Apache does to Hans Landa in the final scene of the movie = Another Win. 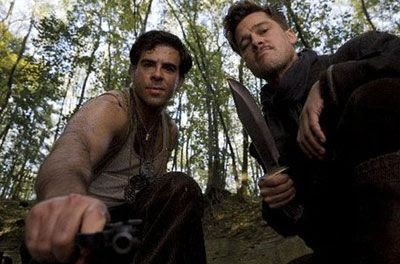