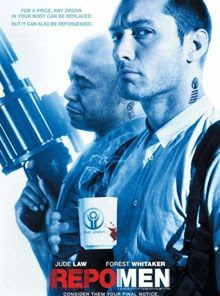 YESTERDAY, I saw the gory action thriller Repo Men (starring Jude Law and Forest Whitaker), and I’m still pondering about how I feel about the ending. Was it a neat twist? Or was it totally f**ked up that the audience was watching a friggin’ dream during the entire final half of the movie? This reminds me of that one Family Guy episode where Stewie finally manages to kill Lois...only for us to find out that this was actually happening in a fantasy Stewie had while wearing a pair of virtual reality goggles. And Brian the dog told him afterwards that this plot device was cheating the audience, much like how the ending to the final episode of HBO's The Sopranos screwed over the fans (I never watched the TV show...but I heard that this episode concluded with a cut to black in the middle of an intense scene). What were we talking about again? Oh yea— Repo Men was okay. I wait for the day when people can actually get ear transplants (like in the movie) that come with a built-in socket where you can plug in an earphone. You heard right. I also watched She’s Out of My League (for free, that is). I like how the screenwriters took advantage of the whole "romance flick ends with guy and girl making up at an airport" cliché by actually having the main dude (Jay Baruchel...best known for his role as one of Seth Rogen’s douchie friends in Knocked Up) work at an airport. This movie was a’ight as well... Alice Eve and Lindsay Sloane are hot. ‘Nuff said. 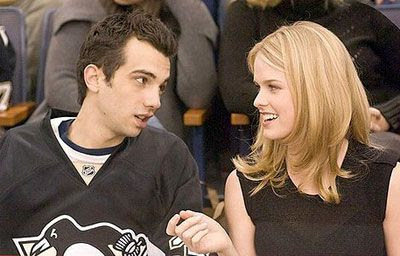