GREEN LANTERN... I watched the movie yesterday, and on a pure entertainment level, Green Lantern was pretty enjoyable. Ryan Reynolds did an amusing job as Hal Jordan and his green-suited alter-ego, even though I heard that the way the character is portrayed in the comic book (since I never read one issue of it) isn’t as sarcastic as Reynolds made the superhero out to be. Other characters such as Sinestro (played by Mark Strong) and Parallax were your standard comic book figureheads (Yes, I just found out that Sinestro is in fact, THE main villain in the Green Lantern universe. Hence that scene during the end credits of the movie)...obviously in the same category as the Silver Surfer and the giant dusty incarnation of Galactus in The Fantastic Four 2 than Magneto in X-Men: First Class, or the Joker in The Dark Knight. (NO recent comic book villain can compare with the Clown Prince of Crime in The Dark Knight...) 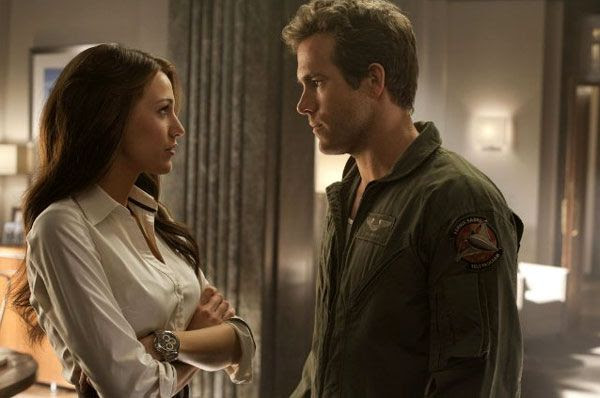 In regards to the other human characters in the movie, Blake Lively was gorgeous as Hal’s main squeeze Carol Ferris...though after watching the bank robbery thriller The Town (which I liked) last year, it was interesting to see Lively without that Boston accent or the trashed-out, sexy but drugged-out appearance she had in the 2010 film. Green Lantern’s make-up team did a good job of making Peter Sarsgaard look like a total loser as Hal’s human foe Hector Hammond, while Tim Robbins (who I last saw in Steven Spielberg's War of the Worlds 6 years ago) played Senator Hammond, Hector’s disapproving dad. In terms of special effects, the visual look of Green Lantern was very similar in tone to that of The Fantastic Four. It appeared decent on the big screen, though I’m sure the FX will translate a lot better on the small screen when the DVD comes out. Or was it vice versa?

So all-in-all, Green Lantern was your typical but fun summer fare. Just to bring up some tidbits from the film that aren’t movie-related, I like how the film actually showed the futuristic helmets that F-35 fighter pilots wear. I like how the International Space Station made a quick cameo in Green Lantern...and so did the now-cancelled Ares V rocket that NASA was gonna use to send astronauts back to the Moon. Yes, I was gonna use this as a way to shamelessly plug in my other page, The Human Spaceflight Blog. Visit it when you have time, thanks. Email ThisBlogThis!Share to TwitterShare to FacebookShare to Pinterest
Labels: Movie reviews, The Dark Knight, The Town