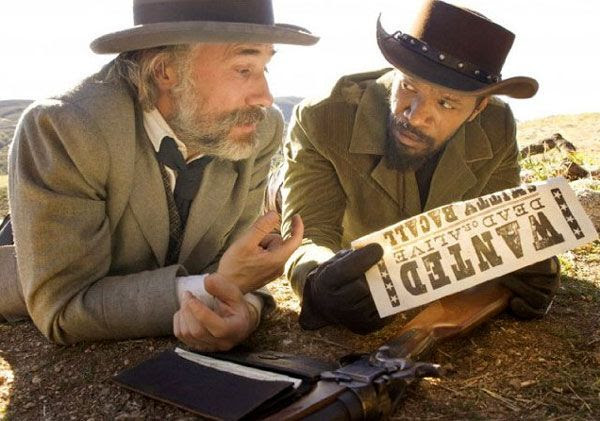 Django Unchained... "The D is silent, hillbilly." So are the words of Jamie Foxx's slave-turned-bounty hunter before he offs a plantation owner's hired goon in Quentin Tarantino's new Western action drama. I saw the flick yesterday, and needless to say, Django Unchained is totally bad-ass. Much like how Johnny Depp appears in almost every Tim Burton (and Gore Verbinski) film and Leonardo DiCaprio shows up in the majority of Martin Scorsese's movies, I expect Christoph Waltz to have a role in Tarantino's next project or two. Which would be justified. Waltz did just as great a job playing a dentist-turned-bounty hunter (who liberates Django from captivity) in Unchained as he did portraying a charismatic but ultimately sadistic Nazi colonel in Tarantino's 2009 Oscar-nominated flick, Inglourious Basterds. In fact, it wouldn't be surprising to see Waltz get a Best Supporting Actor nomination next month for his role as Dr. King Schultz in Unchained. Whether or not he'll win it just like he took home the Oscar for his performance as Hans Landa in Basterds remains to be seen. And the same goes with Jamie Foxx...who is just as intense playing Django as he was portraying a Los Angeles cab driver trying to put a stop to a hit man's killing spree in the 2004 flick, Collateral (which Foxx won an Oscar for). 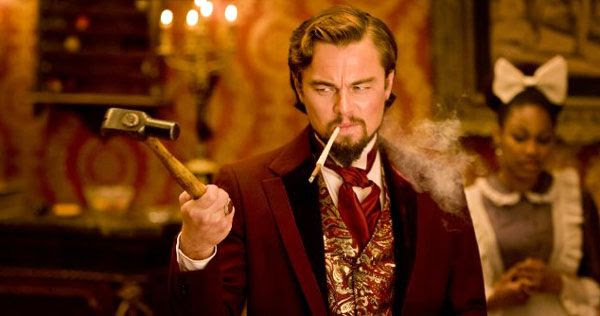 In terms of the other terrific actors in Django Unchained, Leonardo DiCaprio did a commendable job playing plantation owner Calvin Candie in the movie. It's clearly obvious that DiCaprio is very diligent in trying to win that coveted Academy Award...what with Candie going from a carefree um, slavemaster when Django and Dr. Schultz first meet face-to-face with him—to Candie literally being on the verge of shattering someone's skull with a hammer once he finds out that he was betrayed. Samuel L. Jackson, who played it calm and cool as Mace Windu in the Star Wars prequels and Nick Fury in Marvel flicks such as The Avengers (and even as Jules Winnfield in Tarantino's 1994 classic, Pulp Fiction), was haggard but conniving as Candie's right-hand man Stephen in Unchained. We also get humorous cameos by Don Johnson as fellow plantation owner Big Daddy, and Jonah Hill playing one of his hooded lackies who try futilely to eliminate Django and Schultz after the two leave quite a mess at Big Daddy's plantation. (Oh, and it's about time you appeared in another Oscar-caliber flick besides Moneyball, Jonah.) And last, but definitely not least is the lovely Kerry Washington...who switched from being a former White House press aide in the ABC TV show Scandal to Django's beautiful but much-abused wife Broomhilda in Unchained. Not to spoil the ending of the film for y'all, but it's understandable why Django would kick ass before taking names after seeing how Broomhilda is mistreated at the hands of Candie and other slavemasters. That's why Dr. Schultz should get props for getting Django unchained. 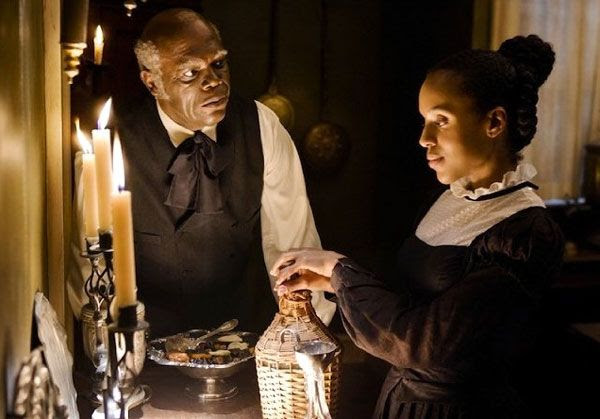 All-in-all, Django Unchained is a nicely-done flick. From the gory violence and vulgar but humorous dialogue (even though the movie has gotten some criticism over the constant use of the "N" word) to the operatic opening song and constant hip-hop beats, Unchained has Tarantino written all over it. Which is a good thing. The movie also has amazing cinematography...especially during the montage where Django and Schultz are riding through snow-capped mountains and other Western terrain collecting bounty as they wait for winter to end. (I think most of these locales were shot in Montana. Just sayin'.) Django Unchained, just like Inglourious Basterds, is a feel-good flick in that Tarantino uses painful moments in history to show the bad guys getting their asses handed to them by people who they put down and persecuted in real life. Whether it's Hitler being gunned down by a Jewish hit squad inside a locked movie theater in Basterds, or Django using a slave owner's whip against him in Unchained, it's a thrill to see dark chapters in world and U.S. history get upbeat but (still) bloody twists to them. With clever Tarantino dialogue to boot. Happy holidays, everyone! 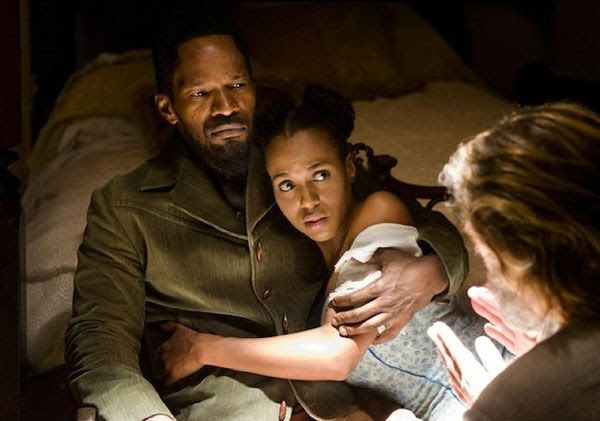 Email ThisBlogThis!Share to TwitterShare to FacebookShare to Pinterest
Labels: Academy Awards, Attack of the Clones, Iron Man, Movie reviews, Revenge of the Sith, The Avengers, The Phantom Menace