I watched Peter Berg's latest action flick starring Mark Wahlberg earlier today, and all I can say is, it was intense. Lone Survivor follows in the tradition of Zero Dark Thirty and 2001's Black Hawk Down in showing the triumphant and sometimes tragic exploits of U.S. Special Forces in a movie that was wide-released in early January. Survivor doesn't have any political undertones like those aforementioned films, but it does bring to mind the fact that American soldiers should no longer see combat in Afghanistan by the end of this year—when pretty much all of of the U.S. military will pull out of the Central Asian country after 13 years of fighting the Taliban and Al-Qaeda. Speaking of the Taliban, Survivor never mentions what happened to the chief warlord, Ahmad Shah, who was behind the June 2005 ambush that led to the deaths of three Navy SEALs and 16 fellow soldiers aboard a Chinook helicopter. (Upon doing some research online, Shah was killed in a shootout with Pakistani police in April of 2008.)

While the amount of casualties that the U.S. sustained on that single day in 2005 was one of the most horrific in the 12-plus-year Afghan war, the reason why Lone Survivor got made was obviously because of the heroism that the SEALs displayed during their ill-fated mission, Operation Red Wings. 19 American troops lost their lives during this sortie (which is eerily the same amount of casualties that U.S. Special Forces sustained in Mogadishu, Somalia during the events shown in Black Hawk Down)...but between 100-150 Afghan insurgents were casualties during this firefight. It's because of this that Berg fittingly began Lone Survivor with a montage of photos showing SEAL recruits going through 'Hell Week' as they trained to become some of the most disciplined and deadliest soldiers in the world; and why we shouldn't forget those brave men who gave their lives to serve this country on that fateful day. But since this is a movie review, I'd also like to point out that the action scenes were nicely done, and the location scouts did a great job finding places in New Mexico that closely emulated the mountainous terrain of Afghanistan. I'm sure the scenery was enhanced by visual effects houses like Industrial Light & Magic—which worked on the movie and was most likely responsible for creating digital facsimiles of such assets as the AH-64 Apache choppers that would come to the rescue in Survivor's climax.

As the 2010 flick The Green Zone and even his 2012 sci-fi film Battleship have shown, Peter Berg loves portraying the U.S. military in an exciting light on the big screen, and Lone Survivor is no different. But it's also a tale about facing the ultimate cost of serving one's country. Whether it's fighting a rogue warlord in Afghanistan or eliminating Osama bin Laden in neighboring Pakistan, the Navy SEALs should be commended for taking on the most dangerous assignments in the name of helping to make our country (and the world, if you want me to get overly dramatic) a safer place. That is all. 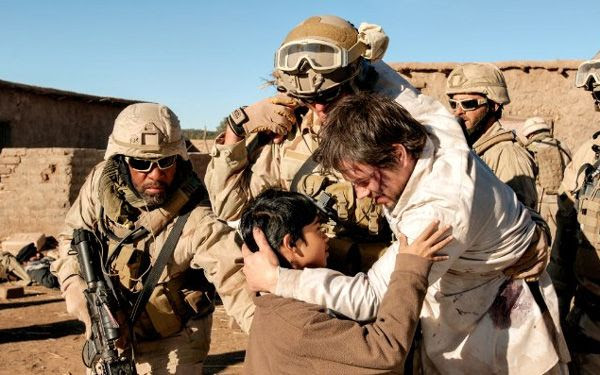