I Have the Sudden Urge to Watch INDEPENDENCE DAY (Only the First Movie, That Is)... 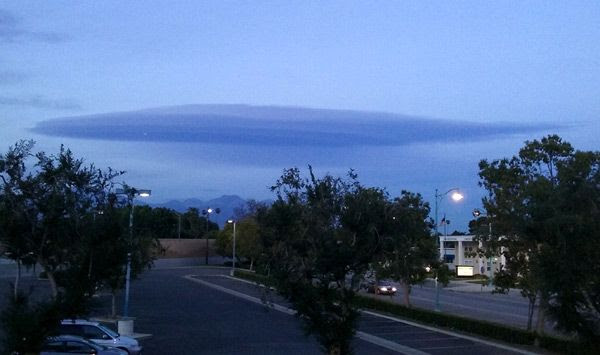 I was walking back to my car after watching The Fate of the Furious at the theater a few hours ago when I saw this cool cloud formation lurking above the San Gabriel Mountains here in Los Angeles County. Pretty awesome... It reminds me of the 15-mile-wide alien destroyers in the 1996 hit film Independence Day. Where's Jeff Goldblum and Bill Pullman when you need 'em? But not Will Smith. If you saw last year's Independence Day: Resurgence, you'd know why. God, that sequel broke my heart—for all the wrong reasons.

As for The Fate of the Furious, just like the four previous Fast and the Furious movies, it was ridiculously awesome! Lots of crazy action sequences... My favorite line of the film was the one from Hobbs (Dwayne Johnson) to Deckard (Jason Statham): "I'm gonna knock your teeth so far down your throat, you're gonna need to stick a toothbrush up your ass to brush 'em!"

Email ThisBlogThis!Share to TwitterShare to FacebookShare to Pinterest
Labels: Back in the Day, Independence Day, Movie reviews