SOLO: A STAR WARS STORY... The Final Poster and Theatrical Trailer Are Here! 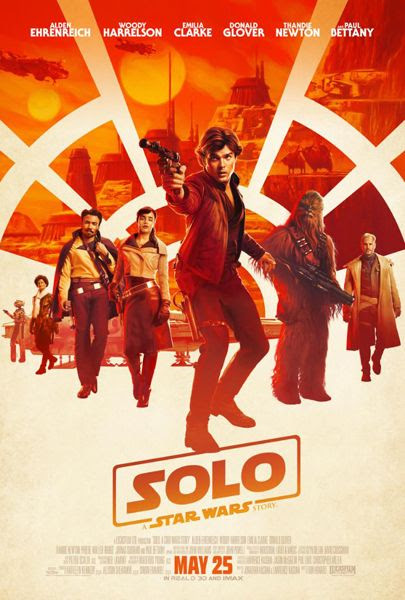 A few hours ago, Disney aired a new preview for Ron Howard's upcoming Star Wars installment during American Idol on ABC TV. The preview—which should appear on the big screen in front of Avengers: Infinity War less than three weeks from now—finally gives us a hint about what the main story will be. Needless to say, it's a heist film, just like Rogue One: A Star Wars Story is, but on a smaller, more comedic scale. And I'm diggin' it. The new trailer gave me more confidence that Alden Ehrenreich will do a commendable job impersonating the great Harrison Ford in his take as Han Solo. Donald Glover looks more and more awesome as Lando Calrissian, Emilia Clarke is gorgeous as Qi'Ra, Woody Harrelson will once again play a mentor figure (like he did to Jennifer Lawrence in The Hunger Games franchise)...this time to Solo, and Chewbacca (Joonas Suotamo) definitely looks like he'll get to shine in Solo: A Star Wars Story (compared to the amount of screentime he had in The Last Jedi). And of course, the Millennium Falcon will have its own origin story as well. Can't wait to see how badass Paul Bettany will be as Dryden Vos; ditto with the mysterious Enfys Nest (the actress who plays her hasn't yet been revealed).

There are so many cool images in the new Solo trailer that I couldn't fit most of them here. But why would you want screenshots anyway when I posted the trailer itself at the very bottom of this blog entry? I hope you're as excited for this new Star Wars flick as I am! If not—well, there's also the start of filming for Star Wars: Episode IX to look forward to this summer (in late July, to be exact). That is all.

Email ThisBlogThis!Share to TwitterShare to FacebookShare to Pinterest
Labels: Rogue One, Solo, The Avengers, The Last Jedi, The Rise of Skywalker, Youtube