SO ACCORDING to various online news reports (who in turn got the news from Shia LaBeouf, who will play the archaeologist's sidekick in the upcoming film, at last Sunday's MTV Video Music Awards), that's the new title of the fourth Indy installment. When I first heard about it, I was thinking, "Um, isn't that title a little long?" But then I thought about Pirates of the Caribbean: The Curse of the Black Pearl, and thought, "Nope, it's not". It's catchy...and obviously fits in with The Temple of Doom and The Last Crusade. Now hopefully The Kingdom of the Crystal Skull will be just as good as these previous sequels (or at least The Last Crusade. I didn't really like Temple of Doom). We'll see... If Rocky Balboa and Live Free or Die Hard are any indication, there's a good chance Indy IV just might deliver. *Crosses fingers* 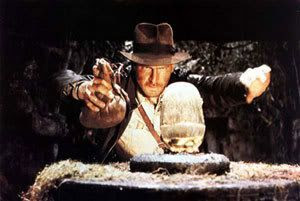