The WGA Strike... I’d be indifferent, if not for the fact the screenplay for Transformers 2 hasn’t been completed yet, and production on the sequel will most likely be delayed. How this affects the film’s June 26, 2009 release date, we shall see. Also, the seventh season of 24 may be delayed because of the walkout as well. Worse-case scenario: Day 7 will be pushed back to 2008-09! In the words of Jack Bauer: Damn it! Curse you Writers Guild of America! And curse those screenwriters’ hides! Just kidding. Anyways, I need to re-register my Hard-Cores II script (which I wrote in 2001) with the Guild as soon as I can. Which would be...now. The screenplay’s first certificate expired in February. No, I didn’t write a porno flick...

Back to Transformers... The DVD sold 8.3 million units in the first week since its October 16 release. If you want to put this in perspective, 300 took 10 weeks to sell 8.3 million copies, and Happy Feet took 6 months to sell 9 million copies. In its second week, Transformers remained No. 1 with 5.1 million units sold and a two-week gross of $117,010,180. In its third week of release, Transformers fell to second place after the Spider-Man 3 DVD made its debut. However, the Michael Bay flick is still No. 1 in HD DVD sales. Thank the Transformers Live Action Movie Blog and Superhero Hype for the details. 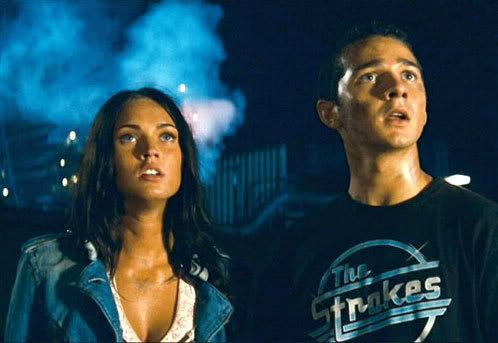 Email ThisBlogThis!Share to TwitterShare to FacebookShare to Pinterest
Labels: 300, Revenge of the Fallen, Spider-Man, Transformers