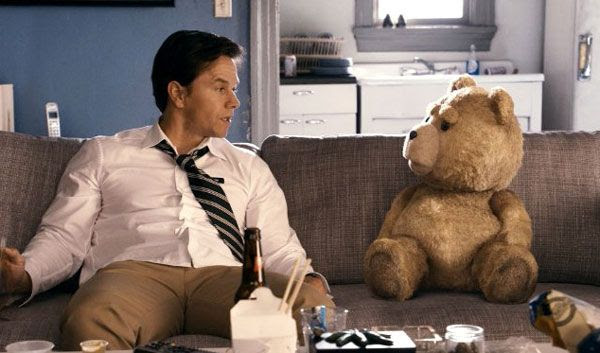 Ted... I watched the stoner fantasy comedy right after I saw The Amazing Spider-Man at the theater on Tuesday, and what can I say; Seth MacFarlane did it again. He hilariously brings Family Guy's irreverence and raunchiness to his latest live-action flick, which is about a dude named John Bennett (Mark Wahlberg) who develops a lifelong friendship with a teddy bear that magically came to life when Bennett was a child. Originally, I thought that Ted was voiced by Seth Rogen (seeing as how the stuffed animal completely sounds like the Knocked Up, Superbad and Green Hornet actor in TV commercials)...but I didn't know that MacFarlane also lent his voice to the trash-talking bear till I actually watched the movie. Of course, an inconsistency with the film is that Ted sounds like Rogen in one scene and Family Guy's Peter Griffin (who's also voiced by MacFarlane) in another! 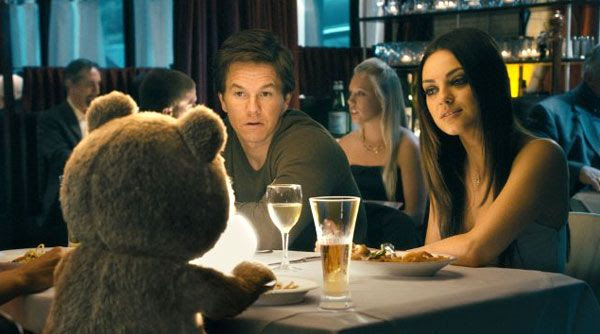 Along with Mark Wahlberg, Ted's cast also includes the lovely Mila Kunis (who voices Meg on Family Guy and teamed up with Wahlberg in 2008's video game-inspired action flick, Max Payne), Joel McHale (of the NBC TV show, Community), Giovanni Ribisi (in a creepy Sandusky-ish role... If you watch the film you'd know what I was talking about), Patrick Stewart as the movie's narrator, and other Family Guy cast members Patrick Warburton and Alex Borstein. Ted also features cameos by gorgeous music artist Norah Jones, Tom Skerritt of Top Gun fame, Sam Jones of the 1980s TV show Flash Gordon and Ryan Reynolds in a brief but funny role. Everyone here is game to Ted's offbeat humor...with Ms. Jones talking about how she once got it on with the teddy bear, and Warburton and Reynolds playing a newly-merged gay couple. But the movie obviously revolves around Wahlberg's Bennett and Kunis' character Lori Collins...and how Ted continuing to be "thunder buddies" with Bennett is putting a strain on Bennett's relationship with Lori. 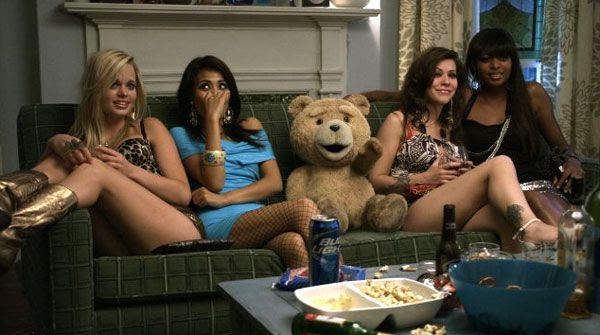 While the romance between Lori and John may seem heavy-handed at times, their relationship is still believable...and so is John's friendship with the teddy bear that became alive on Christmas morning in 1985. Although Ted, like John, becomes a foul-mouth bong smoker once he got older, he never loses the charm that makes a stuffed animal a person's best friend when he/she's a little child. Despite Ted making sexual comments about an employer's wife during a job interview (Ted got hired anyway because the employer liked the bear's trash-talking attitude), thanking Norah Jones "for 9/11" (despite the fact Jones is actually an Indian-American who's not Muslim) and partying with prostitutes in which one of them defecated on the floor of Lori's apartment, the audience I watched the movie with still responded with an "Awww" whenever a cute close-up of the teddy bear showed up on screen. And audience members remarked with "No!" when Giovanni Ribisi's creepy dad and his fat son/lover (according to Ted) was about to maim the teddy bear after he was kidnapped by the duo in the movie's climax. Oops, I forgot to say spoiler alert. 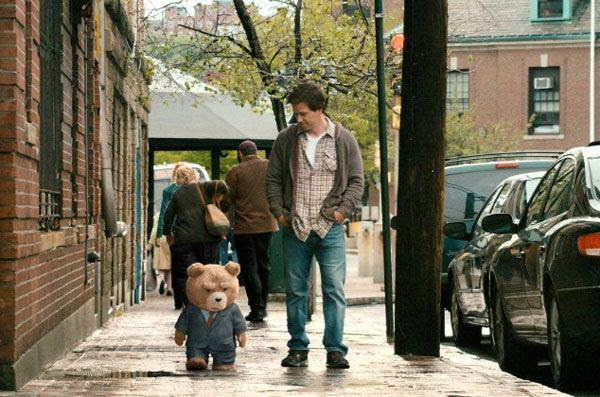 So to give the gist of this review, I enjoyed the movie Ted. How many other films do you hear characters telling thunder (the sound that accompanies lightning...not Oklahoma City's professional basketball team that fell short of winning an NBA championship last month) to "suck their d**k"? And when's the next time you'll see an animated live-action teddy bear getting into a brawl with a duck? Yes, you heard right. And when's the next time you'll see a stuffed animal having sex with a hot blonde co-worker (despite the fact Ted commented later on in the film that he didn't have a penis. Did he use a strap-on or something? Okay, I won't go there)? These are only some of the many ridiculous scenes that make Ted a hilarious flick. If you're a fan of Family Guy and MacFarlane's other cartoons American Dad and The Cleveland Show, then you'll enjoy Ted. If you despise MacFarlane and think that the cartoons mentioned above are works of the devil, then you'll hate it. You'll probably despise it even more if you have Lou Gehrig's disease. See the movie to know what I'm talking about.

Oh, and the name of the teddy bear I had when I was a kid is Fuzzy. I'm sure he can score with a lot of hot trashy chicks if he came alive too. That is all. 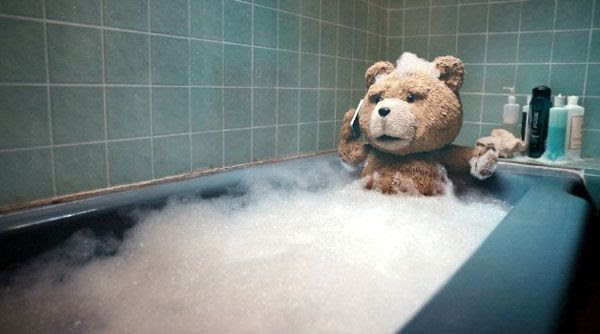