Image of the Day: A Mandalorian Artwork...

In honor of Boba Fett getting his own Star Wars movie soon, just thought I'd share this artwork that I drew of the Mandalorian Commando 23 years ago...when I was a freshman in high school, and George Lucas recently announced that he was gonna film the prequel trilogy. The Boba Fett spin-off is set to be written and directed by James Mangold, who helmed last year's X-Men flick Logan and such movies as 1999's Girl, Interrupted, 2005's acclaimed Walk the Line and 2007's 3:10 to Yuma (one of my favorite all-time Westerns). Boba Fett, as well as Obi-Wan Kenobi, are two of the most beloved characters in the Star Wars saga who'll get their own films after Episode IX hits theaters in December of next year.

And speaking of another beloved Star Wars character, I can't wait to watch Solo: A Star Wars Story at AMC Theatres tomorrow! I'll post my (hopefully positive) review of it by this Sunday. Happy Friday. 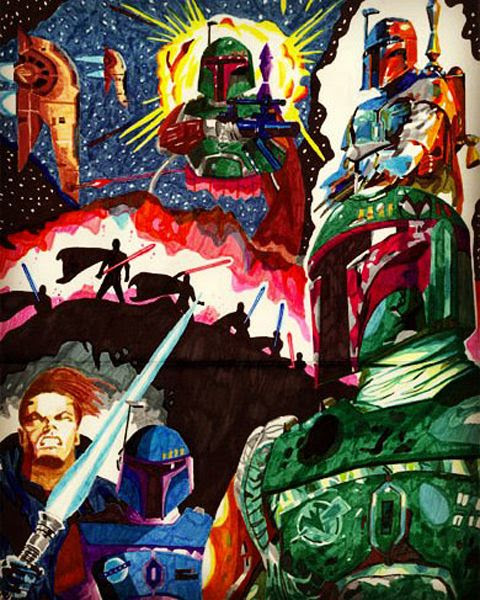 Email ThisBlogThis!Share to TwitterShare to FacebookShare to Pinterest
Labels: Attack of the Clones, Back in the Day, Revenge of the Sith, Solo, Star Wars trilogy, The Phantom Menace, The Rise of Skywalker